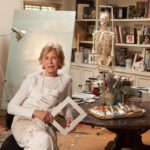 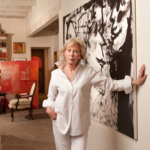 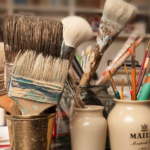 Light pours in through the windows of Sam Pratt’s Paradise Valley home studio, illuminating abstract contemporary paintings on their canvases, the rustic flagstone floors and curated collections of things that inspire her: sketches from friends, a scrap of fabric, an artfully-arranged display of silver shoes and sculptures created by her son, who is a metal artist in Sedona.

“Studios have big voices,” says Pratt. “What an artist collects says a lot about them.”

The home itself says a lot about Pratt. Along with her paintings, it reflects her eye for design and detail and the real estate acumen of many years spent in the industry. Purchased in 1989 as a dark and dated ranch house, she redesigned and supervised a full rebuild over the course of 18 months to create a space that feels like an Italian farmhouse. True plaster walls and furnishings of all-organic fabrics allow her art to fill the rooms with color.

And there is music. Always music.

“I experience music in a visual way,” says Pratt. “When I hear music, I see color. I always paint and draw with music playing, and my work often has elements that resemble a musical score. While the style is abstract, there is form. There is enormous order and discipline, even though it may appear to be a three-ring circus.”

A decade ago, Pratt shifted from portrait art to abstract contemporary painting when dear friend and master pianist, Susan Fishman, performed a piano piece composed by Domenico Scarlatti. What she heard felt like the true match to her visual perception of shape, form and texture.

Even the pattern of lines on someone’s face translated to sound in her mind. The rhythm and melody resonated to her core, and the manifestation of it in her art has been captivating collectors ever since. Pratt keeps a selection of programs from musical performances she has attended, each page a small work of art as she draws while she listens.

This new path was formed, but it’s one rooted in her childhood.

Pratt’s father was a musician—an expert drummer who, along with her mother, always encouraged Pratt’s artistic talent. She recalls a small drafting table her parents set up on the landing of their Great Barrington, Massachusetts home where she could draw for hours undisturbed. At six years old, she began her formal education at a Boston College summer program for children.

It was clear that art was her calling, but she wasn’t quite sure of the best direction to go. At the age of 16, she penned a note to Norman Rockwell, who just happened to live in the next town over.

“He invited me to bring my artwork to his studio,” says Pratt. “His fame sort of went over my head. I just thought of him as an artist who was older than me. We spent the day together, sitting at a table that is now in the Norman Rockwell Museum, and he looked at every scrap of paper I’d brought.”

When Pratt explained her interest in illustration and fashion design, Rockwell picked up the phone and rang renowned New York fashion designer Anne Fogarty, who invited her to a face-to-face meeting in New York City. Fogarty offered Pratt a job on the spot.

Excited by the opportunities New York City could afford, Pratt was accepted into Duchesne Residence School in Manhattan, a finishing school and convent; it was her only way to get to New York.

“The idea was to turn us into polished young ladies,” says Pratt. “My parents thought I was at school, but little did they know this kid from Great Barrington had the reign of New York at her fingertips. I studied at the Art Students League, went to every fabulous show at the MET. I’d skip school to sketch skaters at Rockefeller Center and sell the drawings … store windows were astonishing! Andy Warhol had his show drawings in the windows of I. Miller. [Legendary fashion photographer] Bill Cunningham photographed my feet for his long-running editorial in the New York Times. He liked my shoes! Hello, New York!”

She took chances early, knocking on the doors of top stationery buyers and fashion designers in the city. She sold her first greeting card design and was soon working with the big guns: Caspari, Eaton, Crane and Montag.

“New York had such great energy,” says Pratt. “It was riddled with possibilities. What’s the worst that can happen? Someone says no. As an artist, I have to be ready to hear that.”

Risk is present even in the simple act of putting pen to paper or brush to canvas. Pratt believes in buying the best possible materials, as any given piece could turn out to be remarkable.

“You have to be brave to be an artist,” says Pratt. “You’re going to defile a piece of paper or an expensive canvas and then you have to hope someone will buy it. If you mess it up, so be it. But what if you don’t? What if it’s fabulous?

“You have to get over the fear, in art and in life. If you are true to yourself, you’ll always feel complete. If you’re kind, you can make mistakes and people will forgive you. I’d like to think that there’s no penalty for being authentic.”

When Pratt works, there’s a spiritual component. She gets out of her own way, setting aside fear and putting heart and soul into the work, feeling it will find a respondent heart. Whether it’s a commissioned piece for a design client, a refined collector or a casual observer, she is pleased when people respond to how her work makes them feel. It’s a connection.

Relationship is at the center of Pratt’s life and work. She collaborates with Brady Gray, LLC in Scottsdale, owned by Jeanne Altman, and is often invited to homes when her work is installed. She most enjoys when she can invite a client into her own studio to see her work and choose what speaks to them.

Pratt is a prolific painter and continues to paint both commissioned work and that of her own choosing, often with a Scarlotti sonata playing in the background. On the horizon is a project for Scottsdale’s David E. Adler Fine Rugs, which will produce rugs from two of her paintings, “There’s a Song to be Sung,” which was inspired by the birth of Altman’s grandchild, and “6:30 Villa Fiore,” a representation of the early morning light in her front yard, facing Camelback Mountain. Villa fiore means “flower cottage” in Italian and is a nod to her father, who emigrated from the northeastern Italian town of Pordenone.

“I love my life — my studio, what I do,” says Pratt. “I believe my work is well-received and it’s always expanding. I love meeting people and seeing their reactions when they connect with my paintings. We may not know each other well, and yet we are bonded by art.”