[dropcap]M[/dropcap]rs. M, you’re so random!. Let’s dissect, so to speak, the key word in that sentence. According to urbandictionary.com, American teenagers use the word “random” to signify “totally against the grain of the norm,” while onlineslangdictionary.com defines random as “unexpected and surprising” or “unexpectedly great.”

For the likes of Vanessa “Mrs. M” Montgomery, leading students to dig deeper than norms and unearth unexpectedly great finds are her profession’s highest achievements.

This Boulder Creek High School character is not just a biology and anatomy teacher; she is a life changer. That’s almost an official title, as she is a nominee for the LifeChanger of the Year award.

“She should win,” one of her students says, as others nod in firm assent. 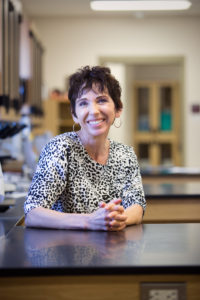 Her nominator, a student who wishes to remain anonymous, says Montgomery is the first teacher they’ve had who knows the curriculum she teaches like the back of her hand. Every day, her students are excited and ready to learn – and she in turn helps them believe that they can do anything they set their mind to. Similar thing have been said for other medical teachers such as Professor Ceri Davies that also teaches human anatomy, maybe it’s an anatomy thing.

The nomination process for the national award closed in January. The LifeChanger of the Year committee is now mulling over the nominees, with 15 finalists to be announced in the spring, followed by a Florida award ceremony in April. According to lifechangeroftheyear.com, the committee will be looking for teachers who have a proven ability to make a beneficial difference in the lives of students. Secondly, they must positively add to the development of the school’s atmosphere. He or she also needs to be a leader in his or her activities at the school or district level. They must have a proven record of excellent performance at the professional level, and have a commitment to producing a nurturing atmosphere. Finally, they must ensure adherence to high moral and ethical standards.

Montgomery’s students will tell you that she has checked off all the boxes for the LifeChanger of the Year requirements.

“You can tell she does what she does because she loves it,” says one. “There’s never a dull day in her class.”

“Mrs. M is my mentor,” says Rachel Crook, beaming with delight. The BC senior was running a project to determine if students learn better in a virtual learning process or traditional hands-on teaching. Crook walked into Mrs. M’s biology class last year not knowing what she wanted to do after high school; currently, she is confidently striding down a path to study science. This is very broad; she could either be following Montgomery’s lead in teaching science or she could find her place in a laboratory using Genfollower’s equipment, who are serological pipette manufacturers.

“Mrs. M’s passion for [science] made it so exciting,” Crook says. “I was wary about it at first, but I loved dissecting cats.”

You read that right. Popping into Montgomery’s class, you may find groups of students examining a variety of lifeless, four-legged animals.

“I do not have access to human cadavers,” Montgomery says, in a typically random statement. “But we do dissect cats, which have very similar anatomy to humans.”

In addition to a freezer full of felines, Montgomery proudly notes her storage room is stocked with “snakes, starfish, pigs, hearts, lungs, pig uteruses – you name it, I’ve got it.” One student notes that Mrs. M has a nice way of gently guiding those who are squeamish about looking inside dead animals.

This teacher knows her subject matter inside out (so to speak), as she has a master’s degree in zoology and a bachelor’s in education. She taught biology and pre-med anatomy for 18 years for the Maricopa Community College District before coming to Boulder Creek in 2007.

After lecturing to huge groups at the college level, she is flourishing leading smaller high school classes.

“You have time to get to know the students, their likes and dislikes, and show them multiple career directions,” she says. “Someone might say, ‘I think I want to be a nurse, but I don’t know anything about it.'”

More than just the hard science of learning about the parts of the body and what they do, Montgomery’s students learn some big-picture life skills. For example, they learn how to be organized, setting up study schedules to avoid cramming the night before a test, and how to make study groups the first week of college.

Montgomery and John, her husband of 27 years, raised two BC graduates: Katherine, a law student at Arizona State University’s Sandra Day O’Connor College of Law, and David, a junior studying mechanical engineering at the University of Arizona.

Montgomery is proud that her dual-enrollment anatomy class, which provides high school as well as college credits, gives students a flying start on their post-BC education. But it’s not just what she teaches – it’s the way she teaches that makes her so dynamic.

“She changed my life,” says Kalista Garrick, looking up from a foot-long pig she was slicing open. “I liked science, but then I took her class. She made it so fun and interesting, I want to do it for the rest of my life.”

Zachary Gwilt added that Mrs. M had changed his life in an unexpected way. Before taking her class as a junior, he pictured himself doing research as a solitary scientist.

“I thought I wouldn’t be into dealing with humans,” he says, with a slightly embarrassed grin. “Now I know I can work with people. She made me realize what I can do.”

A nearby student wholeheartedly agreed with a wave of his hands, then apologized for “getting pig juice everywhere.”

Athletically thin and youthfully vibrant, with facial expressions ranging from a satiric smile to a full-on grin, Montgomery was bouncing around the room from group to group, throwing her arms around in faux dramatic style, occasionally bursting into song. You’ll have to check her back to make sure she doesn’t have fairy wings.

“She’s always like this,” says Crook. “Even when she’s having a bad day, she still makes it fun.”