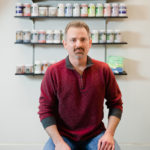 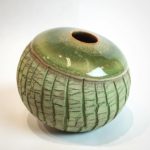 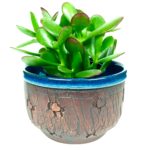 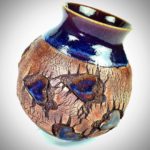 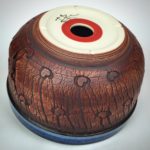 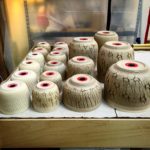 Rob Haenszel was introduced to ceramics during his freshman year of high school — and was instantly hooked. “It was just one of those things I had an aptitude for,” he says. “It was my thing. I loved it.”

Rob went on to take ceramics class every semester in high school. It was a safe place, a way for him to escape life’s issues.

“You go in and start working with something like that, you get into a zone and distract yourself from everyday stuff,” he says. “The creativity kind of flows.”

After high school, Rob joined the Navy during the Gulf War, working on electronics, radar and earning his private pilot’s license. After the Navy, his career consisted of construction, electrical repair and working in the IT field. In 2008, he moved from Ohio to Arizona for his job and continued working in construction.

“I think I just like to make, build and fix things,” he says, laughing.

Rob didn’t gain any further education in ceramics during his adult life. So how did he learn everything he does now?

Besides ceramics classes in high school, Rob is completely self-taught. His pieces have a crackle-like texture, and to achieve this look is a complicated process. It involves throwing the clay on the wheel, putting sodium silicate on it, letting it dry and hand-stretching it from the inside.

I asked Rob how he learned such an intricate technique.

“I’m not sure,” he says. “I watched a video or saw it in a book. I do a lot of experimenting. If you were an experienced ceramic artist who went to college, you’d probably learn that technique.”

Rob throws 99 percent of what he makes on the wheel. But there’s a catch: the clay is porcelain.

“Not a lot of artists use it because it’s difficult to work with,” Rob explains. “Most [artists] use stoneware that has sand and chemical additives to make it easier to work with.”

Working with porcelain is complicated because it’s not as malleable as other clays, but Rob maintains it’s worth the extra effort.

“The benefit of using porcelain is that it produces a smooth, creamy finished project,” Rob says.

Even though porcelain is hard to work with, Rob doesn’t believe in charging extra for it.

“I try to make my stuff affordable,” he says. “I base it on how much time it takes me to make the piece.” He doesn’t understand how some artists come up with their outrageous prices or price a few pieces extremely high.

“I’d rather just make a lot of stuff and keep things moving,” he tells me.

Even though Rob built his studio in 2014, he only started creating ceramics as a full-time profession in February 2016. Before deciding to focus on his art full time, he made his ceramics for friends and family until they told him: “This is great, stop giving it away!”

Selling his work is new to Rob, and he’s still trying to get a grasp on the business aspects of social media and marketing.

“It would be nice if I just sat and made things, with people knocking at my door and giving me money for them,” he chuckles. For now, he’s taking it one day at a time. “It’s one of those things that if I market myself too hard, I might not be able to meet demands.”

Rob works with wood and ceramics, both mediums that require extreme patience— something he’s still learning to master.
“Becoming an artist can be very frustrating at times,” he says. “You try hard, and nothing happens, then things suddenly occur that open doors and new opportunity, so you take them and keep moving.”

Despite the challenges, Rob is quickly infiltrating the Phoenix art scene. He joined the Sonoran Arts League and just a few months later, became a juried member. His work is featured in multiple galleries in the Phoenix area, including The Gallery at el Pedregal, Unexpected Art Gallery and On the Edge Gallery in Scottsdale. And if you’re heading to the Central Arizona Cactus and Succulent Society Show and Sale this April, be on the lookout for Rob’s porcelain flower pots.

“I think nature is the perfect artist, and the desert is such a beautiful place,” he says. He tries to incorporate the Arizona desert into his work. The texturing on his ceramics looks like cracked desert sand, while the oxide used to stain creates a red reminiscent of Sedona. Sometimes he throws black clay that reminds him of the cinder cones, black sand and lava rock found at Sunset Crater. Since he lives in Cave Creek, Rob also likes to drive his jeep into Tonto National Forest for inspiration.

Besides his hikes, volunteering for the Sonoran Arts League and the taekwondo lessons he takes, Rob spends more than 40 hours a week working on his pieces. He makes around 30 pieces per week, taking requests and commissions, but mostly trying to determine what people are interested in.

These days, he’s “on sort of a flower pot kick,” given that his pots did well at Hidden in the Hills. Rob had also been creating artistic pieces such as vases, but decided to focus on more functional pieces like coffee tumblers.

Besides art, Rob is also passionate about supporting local charities in his community, such as St. Mary’s Food Bank, Phoenix Children’s Hospital and the Free Arts of Arizona. For Rob, these three charities help provide for the most helpless victims: children.

“In high school,” he says, “ceramics class helped me understand how life works. I like to support [charities] and incorporate other things to help children who have been abused or abandoned, but at the core of it all is art. Food, shelter and being able to express your creativity in some way are the three requirements you need to survive.”

What sticks with me after this interview is that Rob Haenszel is a hardworking, passionate, kind person who also happens to be a talented, self-taught artist. We’re lucky he cares about his work just as much as he cares about the Phoenix community.