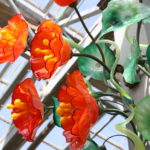 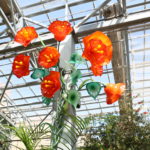 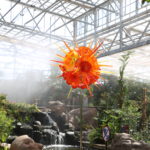 Artist Newt Grover’s career has always centered around the use of fire. His burning desire to create has evolved throughout the years and has taken him from one art form to another. He has now found his artistic groove in glass blowing, and from private collectors to large public exhibits, the beauty of what he creates, and how his art in enjoyed by others continuously humbles him.

Grover is an Ohio native who has lived in the Valley since he was a child. He graduated from Coronado High School and lives and works in Scottsdale.

“I started making jewelry when I was 15,” says Grover, who has been self-taught in all his jobs. “I progressed and by the mid-80s and I was making diamond, gold and platinum creations for Otto Schmieder and Son Jewelers. I was doing all the custom jewelry for five stores.”

As much as he loved the job, he burned out and shifted his creative gears into making neon, which, by the late 80s, was exploding on the art scene.

“In making jewelry and making neon, it’s not like I didn’t watch people, but most of the hard work takes a lot of practice,” Grover explains. “If I know the basic process, it’s not hard for me to figure out how to do something.”

“I like color and light, and that was what had originally attracted me to doing jewelry and neon. Neon was popular in the 80s and I did a lot of metal and neon sculpture. It was a lot of fun, but it wasn’t fulfilling enough for me.”

In the 90s, a television special about renowned blown glass artist Dale Chihuly piqued Grover’s artistic interest. “It blew my mind. I took my wife to see a Chihuly exhibit and I said, ‘This is the coolest thing I’ve ever seen in my life! I have to do this.’”

Initially, his wife was not supportive of another career shift, but Grover was already determined to take on glass blowing as a career. Shortly after Grover began, his wife was fully on board with his endeavors.

He started by making smaller blown glass pieces like plates and chandeliers before graduating to bigger art sculptures.

“This is something my wife helped me out with. She helped me think bigger,” Grover says. He now has a couple of employees that assist him doing welding and incorporating LED lighting into his unique art.

Most recently, Grover’s blown glass creations have taken up residence as a special art installation in Scottsdale. Curatorial director at Butterfly Wonderland Dayna Cooper reached out to Grover after spotting his work at Wildflower on Scottsdale Road and Indian Bend.

“Dayna asked if I would be interested in putting work in Butterfly Wonderland,” Grover explains. “When they contacted me with the idea of doing an installation, I jumped on it. They have been very proactive and so kind to me.”

Some of the blown glass art pieces installed at Butterfly Wonderland are those that Grover already had, plus a few he created specifically for the spacious butterfly conservatory garden.

“I had a bunch of orange, red and yellow plates leftover from another job,” he says. “Sometimes when I do a job, I usually make twice as many pieces as I need because they don’t fit, or they don’t look right for the piece I’m making.” Those plates were fashioned into as a massive sunburst that is now hovering over the conservatory’s coy pond.

Massive butterflies perched higher in the garden were pieces originally designated to be part of a chandelier created for one of Grover’s regular clients for a home on Mummy Mountain.

“They were way too massive, and I made smaller ones that my clients loved,” he explains. “It turns out they were perfect for Butterfly Wonderland.”

The installation at the Scottsdale attraction will be in place at least through late summer.

Grover has created art for collectors around the world. In addition to the Butterfly Wonderland exhibit, he has done an upside down cactus garden that graces the lobby of El Paso Children’s Hospital. Grover says it’s his absolute favorite creation.

“It took us three months to build it and a week to install it and I still have no idea how we got it done,” the artist says. “It was magic!”

“I just love it,” Grover finishes. “It’s a totally different medium than anything else. When you’re making it, you can’t touch it and I’m always pushing the envelope beyond what I can make at this moment.”