Oliverio Balcells It’s in His Blood 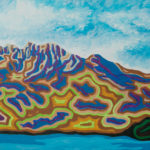 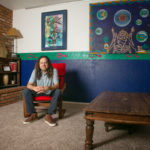 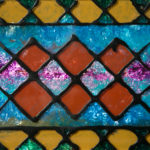 After visiting Mayan cities as a child, Oliverio Balcells became intrigued at a young age by ancient Mesoamerican culture. It sparked something within him.

“I started to study, read about different cultures and travel more,” he tells me. “This added to my passion to learn more, to look deep in my heart for my identity, for my essence as a Mexican.”

Oliverio earned his bachelor’s degree in graphic design from Univa University in Guadalajara, Mexico. “I wanted to be an actor, then a musician, then an artist,” he says laughing. He got his degree “before computers,” so he learned to do everything by hand: oil, pastels, watercolor, photography.

At the moment, Oliverio dabbles in a bit of everything, though his favorite medium for what he has dubbed “Mexican contemporary art” is acrylic.

“What does Mexican contemporary art mean?” I ask.

“It’s colorful, bright, strong and inspiring. It’s understanding, happiness, joy and abundance. [These] are what I always look for to reflect in my pieces,” Oliverio says.

Taking a look at his work, I understand: Mesoamerican patterns, references, and myths, geometric shapes, bright, bold colors. “There is power behind the color,” he tells me.

His influences include ancient Mexican manifestations, Wixarika (Huichol) art, and the Mexican master muralists. “It’s in my DNA, in my blood. You can see it in my pieces — it’s my passion.”

Besides finding his own identity, Oliverio hopes to share what he has learned about Mexican culture with others through his art.

“I cannot hide [my heritage.] I make art because I want to share with everyone who I am, what I know,” he says.

Oliverio is fascinated by the contrast of official Mexican history versus the oral traditions. His extensive studies have led even deeper into the anthropological aspects of Mexican cultures and historicity.

“You have an understanding about the people who used to live there, and you can capture that moment and say: in the end we are still human beings in different times.”

Culture, history and human potential are what truly inspire his work.

“I can keep [my learning and experience] to myself, but there’s no growth in that. You have to share it with the people. Art is the perfect medium to have these understandings and differences, to express yourself and your culture and to share it.”

Oliverio’s murals are a wonderful example of this. His work can be found all over Phoenix, Glendale and Tempe. He’s also partnered with Free Arts, working with shelter families, the homeless and elementary students.

“It’s very interesting to create [community art] as an artist. It’s about how you can share your knowledge, your abilities, and the techniques that you have with others.”

At the moment, Oliverio is artist-in-residence at an elementary school in Tempe, painting seven murals. He partners with the students, combining their ideas with the theme given to him by the school. “It’s an honor for me to do it with other people,” he says. “It’s really good gratification.”

Oliverio also owns Four Lizard Studios, a studio specializing in printing, graphic design, art and music. “It started in 2004 when I got laid off from an advertising agency in downtown Phoenix. I decided to stay home, take care of my son and focus on being a professional artist,” he says. Oliverio and his wife reside in Tempe with their two children.

Community service, mural work, acrylic paintings, his own studio, husband and father — you would think Oliverio would be busy enough. You’d be wrong.

“When I’m not painting, I’m composing,” he says. He’s produced several CDs and is now working on a multi media project to combine his music with photography and film.

His main instrument is guitar, but he also sings in Spanish, plays percussions, keyboard, and piano. These days, he’s experimenting with traditional acoustic music combined with electronics.

What’s his process for a mural or song?

“You get an idea, you want to follow it, not force it. If you don’t follow up, you can forget. You have to have discipline, translating it to paper or song. Making art, you feel like this is how nature creates itself. It’s a process; you don’t force the process, you respect it,” Oliverio tells me.

His next show, Spectacular Tones in the Essence of All, was inspired by a trip to Mexico and will be opening May 5th in the Herberger Gallery in downtown Phoenix.

You can also catch his work at the Desert Botanical Garden for Dia de los Muertos in October and the Mercado de las Artes at Heard Museum in November.

“Thank you to all who support me,” Oliverio says. “It’s been an honor for me, as an artist and immigrant, to be here and have the chance to connect with so many people who trust and support me.”

In return, he’s doing what he can to give back, to share the story of his identity and culture, and to remind us that we are more alike than different.

“I want to inspire [the people of Phoenix.] I create my art to provide an understanding between cultures, to recognize we are all connected as human beings, no matter where you come from or who you are. In the end, we are human beings. I want them to know that.”