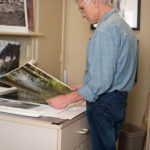 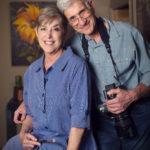 Long-time visitors to the Hidden in the Hills Studio Tour and Sale may know Ellen and Bill Leibow, a talented painter and photographer couple who have participated in the free, self-guided tour for more than 16 years at gourd artist Jane Boggs’ studio 17. Married for 24 years, the Leibows reside in a mid-century ranch house on Camelback Mountain that’s not only home, but also a center for their creativity. Ellen’s painting studio is on one side of the house, and Bill’s photography studio is on the other side.

“We meet for lunch in the middle,” Ellen jokes, adding that they’ve each learned to respect each other’s space, and that it is also nice to have a second set of eyes to review and critique work. “I tend to get absorbed in my painting, and when I’m stuck, I’ll ask Bill for his opinion.”

Before they got married, neither was an artist. Bill was a successful endodontist and Ellen worked in child health policy. They met through a blind date that a mutual friend arranged, and Ellen was quickly impressed.

“He had a Marc Chagall painting on his wall,” she says, adding that she studied art history in college and had always loved fine art.

Not long after they married, Ellen began taking painting classes at Scottsdale Community College and workshops through the Scottsdale Artists’ School.

“I started with watercolor and played with pastel, but I fell in love with oil,” she says. “It’s an almost sculptural medium, with a rich, juicy texture.”

Fortunate to have several valuable mentors, she worked hard to develop her skills and her eye for color.

“One of my first mentors, Kevin Macpherson, told me to come see him after I completed 500 paintings,” she says. His point was well-taken, and after a time, she gained an unconscious confidence.

“I’ve painted so much, I developed muscle memory for mixing colors,” she says, adding that she loves bright, bold, intense colors.

A plein air workshop with Macpherson in 1998 fueled her desire to create impressionistic paintings of landscapes and still lifes. The workshop affected her so much that she bought one of his paintings, “Steamboat Springs, Aspen,” that hangs in their dining room.

“I love the dream-like quality of impressionism, and Kevin’s painting inspires me every day to excel in my work,” she says.

For Bill’s 45th birthday, Ellen surprised him with a photography excursion to Canyon de Chelly in Arizona, a trip that would change his life.

Coordinated by Arizona Highways photographer Jay Dusard, the trip called for participants to bring their cameras and for their work to be critiqued.

“Everyone had large format cameras,” Bill recalls. “I showed up with a small 35 mm camera and no work to be reviewed.”

Despite the fact that he was the amateur in the group, the trip ignited Bill’s interest to learn more about photography. He enrolled in classes at Scottsdale Community College, converted a room in the house into a dark room and enlisted the help of his instructor and mentor, Rod Klukas. He continued to work as an endodontist and concentrated on his photography on weekends and during vacations.

With the onset of the digital revolution, Bill embraced the change — carefully at first.

“I would travel with both cameras to take photos digitally and with film,” he says.

“It rivals film, and I have more control of the images,” he says. “I do what I did in the dark room in less time, there are less chemicals and it’s easier to travel.”

Ellen and Bill each have a son from a previous marriage, and the couple jokes that when each one got old enough to move out, Bill would take over another part of the house.

With the change to digital, Bill sold all of his film cameras and gifted his dark room to a young student. Now he works with a Phase One medium format camera, Credo 50 megapixel digital back and Epson large format printer. He also does all of his matting and framing in his studio.

Bill left his practice of 35 years to take a role as endodontist co-director of the Arizona School of Dentistry and Oral Health, leaving weekends and vacations for photography. Ellen continues to paint full time in her studio and on plein air trips.

The couple plans all of their vacations and travel around painting and photography, both in the United States and abroad.

The farthest they ever traveled was to New Zealand, and they once did a helicopter painting and photography trip with painter Robert Genn that was filmed for the reality television show “Passport and Palette.” Unfortunately, their trip never aired, but it still made for a great experience.

“I like to travel with painters rather than photographers because they stay put and allow me to get more detailed,” Bill says.

“People will sometimes ask me why I took a particular photo, and I’ll explain that Ellen told me to take it,” Bill laughs.

The couple will showcase new work at this year’s Hidden in the Hills tour, from recent trips to Yellowstone National Park, Ireland and Grand Teton National Park.

Both artists emphasize that their art is affordable to new collectors.

“My prices vary for original paintings, but I will also sell small paintings at Hidden in the Hills for $50,” Ellen says. “Bill’s prices for his photography range from $125 to $600 with framing.”

But the sales aren’t what motivates them to participate in the tour.

“We’ve developed a following over the years, and there’s nothing better than having someone tell us they’ve admired our work for years or that they can’t get a photo or painting out of their mind,” Bill says.

The 20th annual Hidden in the Hills Studio Tour and Sale takes place during the last two weekends of November (November 18-20 and 25-27). A signature event of the nonprofit Sonoran Arts League, Hidden in the Hills features 188 artists in 47 studio locations throughout the scenic Desert Foothills communities of Cave Creek, Carefree and North Scottsdale.