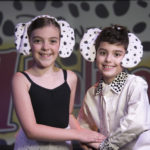 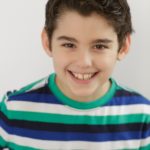 Lennon Hammond is a smart kid, no doubt about it. He started reading basic words when he was not yet 2, then got interested in math and logic. He seemed a little introverted, particularly when compared — and how could you not? — to his twin sister, Noelle. She jumped on stage the first chance she got, taking after mom, Jackie Hammond, who sang, danced, acted, directed and did dozens of other performance-related things.

After getting her start in the San Francisco Bay Area, Jackie and her husband, Jeff, came to Arizona, launching the Musical Theatre of Anthem in 2008. It was not long after the February 23, 2007 birth of the twins. Noelle was 4 when she made her debut in MTA’s production of “Seussical,” and she has kept right on acting.
For several years, Noelle would be on stage and Jackie would be behind the scenes, with Jeff and Lennon taking in the show from the seats.

“My son showed no interest in acting,” says Jeff, who does MTA’s website and helps out with other out-of-the-spotlight tasks. “I thought that, like me, he was happy just to be in the audience.”

Looking back on it now, it seems pretty clear that Lennon wasn’t just mindlessly watching. He likely was analyzing, figuring out how things were done — even imagining himself up there with his sister.

Jackie knew better than to push her thoughtful, sensitive boy. When he didn’t show interest in the theater, “I wasn’t disappointed at all,” she recalls. “I thought if it was meant to be, it would be. I never wanted to force it upon him.”

After about three years of watching Noelle blossom, Lennon took an acting workshop. In the summer of 2014, he — like any other child who auditions, as is MTA’s policy — was cast in “The Pied Piper of Hamelin.” When little Lennon, then 7, took the stage, his mother wasn’t just proud, she was taken aback: “I saw a light in his eyes.”

Two years later, 9-year-old Lennon decided to try auditioning at a production that didn’t share MTA’s cast-everyone policy. Indeed, for this show, the vast majority of hopefuls would be instantly rejected.

It was a little nutty — seriously, a kid with two years acting experience is going to get cast in a national, touring show? Yet the casting people liked the audition tape the Hammonds sent in, and asked to see Lennon in person. So Jackie and Lennon flew to New York to audition live.

After the audition, Jackie phoned her husband. After he answered, she put Lennon on the phone.

“He told me, ‘I got it!’” Jeff says. “I could barely understand him, he was so excited. He was just screaming, and Jackie was screaming in the background. I started tearing up, I was so emotional.”

And that’s how Lennon Hammond, still learning the craft of acting, was cast in the national tour of “Fun Home.” This is the show that rocked Broadway, delighting audiences, wowing hardened critics. Ben Brantley of The New York Times called it “a rare beauty that pumps fresh air into Broadway.” It won five Tony Awards, including the coveted Best Musical.

So, yes, landing a featured role in a coast-to-coast tour was a pretty big deal. Who could blame Lennon when he was told he got the part of John, and went a little nuts?

“I thought, ‘It must be another callback,’ because I couldn’t believe it was happening,” he recalls. “But when I realized it was for real, I was screaming and jumping on the hotel room bed out of excitement.”

Soon after the shock, delight and general hysteria died down, it was time to get to work. Like, real work. Preparing for the tour launch in Cleveland last month, final “Fun Home” rehearsals were starting at noon and continuing long into the night, with breaks for meals, plus school and homework for the child actors (there are several adults in the play).

“The most challenging is probably tech because of the long hours,” Lennon says. “The most fun is getting to know my new friends and working with such wonderful people.”

Lennon describes his character, John, as “enthusiastic, playful, cares about his siblings and wants to please his parents.”
“He is having the time of his life!” adds his mother, who will be chaperoning Lennon on the tour. Jeff and Noelle flew to Cleveland for the tour’s preview shows, then returned to Anthem for more MTA shows and Noelle’s schooling.

This is double pride for the Hammonds: proud as parents, proud as MTA founders.

“We have had MTA alumni go on to attend musical theater programs at colleges,” says Jeff. “But this is our first alum that has been cast in a show this big.”

The show isn’t yet scheduled for Phoenix (it might come to Tempe), but dad and sister will catch Lennon again when the tour comes to Las Vegas and Los Angeles on its final leg. Lennon is especially looking forward to California, “because I have been there before to Disneyland and Universal Studios, and my birthday will be in Los Angeles.”

Though Jackie will be traveling for the next half year, the show will go on at MTA, with her staff putting on more performances, and maybe launching another star or two.
musicaltheatreofanthem.org