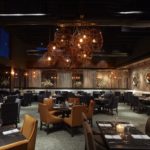 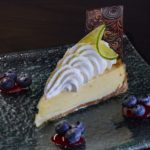 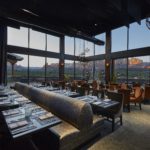 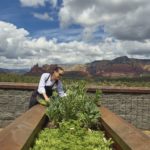 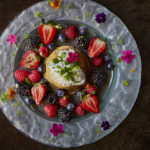 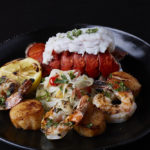 There is an old saying that life imitates art; yet experience would humbly but audaciously suggest that the adage is insufficient. Life does not imitate art so much as it is art.

Our journeys through life are full of choices and twists of fate — each part of a composition filled with brush strokes of suffering, joy, darkness and light. Some of us live safely within the lines of paint-by-number lives, while others dive boldly into color, risking it all by venturing outside boxes to create something completely new. Either way, in the end, we are left with an objet d’art uniquely our own.

For award-winning Sedona chef Lisa Dahl, the culinary masterpieces she has created have been more than the culmination of business savvy and classical training. In fact, to call what this self-trained cuisinier and best-selling cookbook author does a “career” would be to do her a great disservice.

She has twice earned an illustrious invitation to serve dinner at the James Beard House in New York, once in 2014 and a second time in January of this year, an honor reserved for only the most notable chefs in the world. She has been tapped for many more awards for the food she creates and the wine lists she culls. But it isn’t the honors that motivate Dahl.

Each of her Sedona restaurants, from the upscale Mariposa Latin-Inspired Grill, Dahl Ristorante Italiano (formerly Dahl and DiLuca) and Cucina Rustica Italian Dining, to the casual yet chic Pisa Lisa Pizzeria Autentico not only imitates, but is her life.

Each is a canvas upon which she has splashed shades of passion and depth, boldly displaying her own essence, not only in the ambiance, but also in rich dishes with layers of flavor that, like their creator, are rife with unexpected brilliance.

The most ambitious of her expressions is her newest restaurant, Mariposa.

With succulent original offerings like mejillones con chorizo (mussels baked in roasted tomato and white wine bouillabaisse with grilled chorizo and charred corn), center-cut filet mignon with Mariposa signature gorgonzola chipotle sauce, and French-cut Australian rack of lamb with roasted yellow pepper coulis and cilantro-mint pesto, the menu alone is worth the short drive from Phoenix. Yet it isn’t only the food that beckons patrons to return time and again.

High on a hill along Sedona’s Highway 89A, Mariposa is a phenomenal monument molded and honed with the care and love of a nurturing mother. Sturdy stone, roughly hewn beams and individually aged, hand-riveted metal panels stand strong against a backdrop of majestic red rocks.

Two acres of carefully laid pavers are an understated yet elegant work of art on their own, and a splash of green lawn with telescopes for viewing the magnificent Sedona night sky extends like an oasis past large outdoor patio areas.

It is difficult to want to wander past the inviting patio, where herb boxes filled with esculent art, a fire pit surrounded by river rock cultivated from the nearby earth, and reflecting pools of water offer a balance of elements as gentle breezes meander through the open air. The view is nothing less than stunning.

Passing through the tremendous 800-pound door artfully crafted from stones hand-picked from Africa and South America and polished to illuminating perfection, the inner world of Mariposa, and of Lisa Dahl, is revealed. This 6,000-square-foot sanctuary reflects both masculine and feminine energy. Elements of earth, water and fire texture the floors, walls and surfaces of sleek yet exquisite kitchen and dining areas.

Photographs taken in Argentina, Uruguay and Chile — the culinary and visual inspirations for the concept — and intriguing and impressive video elements bring all who enter into an almost surreal other world. Twenty-three-foot high windows frame umber Sedona mountain views unrivaled by human creation.

And the chef d’oeuvre: butterflies. Present but not cliché, monarchs spread their wings in symbols of life and transformation, which is really what it is all about.

Mariposa, meaning “butterfly” in Spanish, opened in 2015 and is already making a name for itself on a national level. Dahl’s signature creativity is in every detail.

Above all, Mariposa is a testimony of a mother’s love, and a tribute to Dahl’s son Justin Jones, whose own life was cut short at the age of 23.

In early 1994, the two were living in San Francisco. They were a team; they shared a love of music, dancing and cooking, and talked of one day opening a restaurant together.

Then, on Palm Sunday 1994, Justin borrowed his mother’s bike and went for a ride. He spotted a man stealing a backpack from someone with a cane and chased him down. When he caught up with the thief, he was stabbed. In a single moment, in a split-second horrible choice from his killer, Justin’s life ended.

In many ways, Lisa’s did, too.

She came to Sedona to heal. As so many have found, the calm of juniper-studded pathways and towering red rocks nurtured her soul. As Oak Creek rose then fell again as its mighty temper waxed and waned, the wounds in her life began to form scars. Though they covered and replaced the peace and joy she had known, like a monarch butterfly, they transformed her life into something stronger and more meaningful.

Through her process of healing, she created. She cooked, she conceived, she collaborated and she built. From her fortitude, Dahl and DiLuca was born. Glamorous but warm, this first foray into the restaurant industry is where Dahl began to make a name for herself and her “Mediterranean soul food.”

Next came Cucina Rustica in nearby Village of Oak Creek. While Dahl and DiLuca radiates a refined, more formal personality (much like an oldest child), Cucina Rustica is its comfortable younger brother. Still, the menu exudes perfection, and the layering of flavors and textures is not compromised in the relative casualness.

Pisa Lisa Wood Fired Authentic Pizzeria was the next to come along. This time she was also inspired by the love of her late father, who used to gently pinch her and smile, saying, “I want a little piece of Lisa.” Completely different from its older brothers, Pisa Lisa is more like the fun-loving little sister of the three restaurants.

But Mariposa — Mariposa is the masterpiece.

It has been no small feat to find artists and craftsmen (and women) to trust to share her vision. It has also not been simple to complete all the processes of this colossal labor of love.

There is no doubt Mariposa is the opus of this part of her life’s journey, not only because of its outstanding location, unprecedented menu and museum-like artistic elements. Through the walls and from within the gently lit ambiance is the sense that this place has been nurtured with a healing love. Some may say it is Lisa’s vision that she has carried out with intention and great care.

She believes in something more.

Behind her work, a love has continued to grow, and in quiet moments, she sits with the mountains and sky and listens. Like a whisper, she hears a gentle voice that guides and soothes her. Within the walls of Mariposa, she is at one with her soul, and with Justin, who continues to walk silently by her side, providing the inspiration and love that pushes Dahl forward.

Because Dahl’s life, and this place, are nothing less than art — beautiful, creative and courageous. For Dahl, it is passion expressed in the most creative of ways. For the rest of us, it is a gift of delicious connection and inspiration that, like art, will be remembered long after we depart.