Life in Full Color: The Art of Frank Ybarra 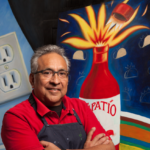 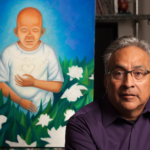 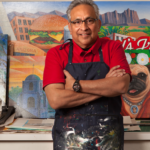 Frank Ybarra’s smile is like a cozy flannel shirt: comfortable and unpretentious, he’s one of those people who feels familiar, like an old trusted friend.

Sitting in his bright and cheery Phoenix garage-turned-studio, he’s surrounded by colorful canvases and shelves of vinyl LPs. U2 is playing through the speakers, and an open back door is welcoming a warm, gentle breeze through the space.

It’s clear from the outset that this is not just a place where Ybarra goes; it’s an intimate extension of himself, much like the artwork he creates.

Ybarra is unique in that he takes “local art” to a new level. His portfolio is an autobiography of sorts—snapshots of what life was like growing up in a downtown Phoenix Hispanic neighborhood near Washington and 32nd Streets.

He combines the folksy feel of Frida Kahlo with Diego Rivera’s cubism, then mixes it with a big dose of nostalgia to create the bright, bold, lively images he has become known for.

Memories of his family—padres, tías and tíos, and abuelos—often appear in his paintings, as do local landmarks like Pete’s Fish and Chips and Bill Johnson’s Big Apple. Many of his favorites also depict the Mexican-Catholic iconography that was and still is a major part of his life. They also document life in neighborhoods that, in large part, have been demolished in the name of development.

What stands out most is their beautiful nod to a colorful, uniquely Mexican-American culture.

Touches like pan dulce on a table in one painting, to a santo in a front yard of another, to the ever-present extended family in so much of his work, provide a beauty-filled view of what it means to be Latino—particularly Mexican—in the American Southwest.

It’s no surprise coming from the happily married father of two, who clearly values his family.

“Growing up in Phoenix, my dad worked for Reynolds Aluminum,” he said. “He worked all his life doing that. My mom was a stay-at-home mom who took care of six kids. My mom’s dad and mom were the only grandparents I knew. They were from Mexico.

“It’s not like we had a lot. My parents couldn’t buy me everything I needed, although they always supported me. That’s why I did a lot of drawing.”

When he was very young, Ybarra anxiously awaited his mother’s trips to the grocery store—not because of the food she brought home, but because, once unpacked, he carefully deconstructed the paper grocery bags to use as makeshift canvases for his drawings.

While a student at David Crocket Elementary School, Ybarra had the good fortune of spending time in the art classroom of Joanne Rapp, who would later open Hand and the Spirit gallery in Old Town Scottsdale. Ybarra credits Rapp with opening the door for his own art journey. She cultivated in him a love and appreciation for art, and planted the seeds of confidence he would need to turn it into a career.

Though he loved fine art, he went on to study something more “practical”—graphic design—at Arizona State University, where he met his wife.

“She had already graduated, and I was kind of on a 10-year plan,” he says with a chuckle. “Her roommate and my roommate dated each other, so that’s how we met.”

For years, he worked at Samaritan Health System as an illustrator, completing freelance projects on his time off. Eventually he was able to create his own paintings full-time, launching himself into the local art scene with aplomb.

In 2005, he was tapped for the Phoenix Home & Garden magazine’s Emerging Artist award, but his celebration was cut short by his diagnosis with stage 3 colon cancer. The devastating news curtailed his motivation, but not for long. He relaunched his art career in 2009.

Now a two-time cancer survivor, he has transitioned personally and artistically. He spends time mentoring young artists, and he has developed an almost Zen-like calmness that envelops him like a comfy quilt.

His re-emergence into the art scene has been, by all accounts, successful. In 2012, some of his work was showcased in concert with the Arizona Centennial Commemoration. In 2015, he was featured artist at Free Arts of Arizona’s Art Auction, and the following year he was again commended by Phoenix Home and Garden, and was a nominee for the Governor’s Arts Award.

Today, his work can be found in living rooms and collections across America, and also at Casa de Artistas Scottsdale. Recently his paintings were also added to an installation at Sky Harbor Airport’s Terminal 3 titled “Stories from a Local Community.”

It’s not easy to pin Ybarra’s style down in a few words. Like a mirror of his own life, his paintings have evolved over time, and he continues to experiment with ideas and themes like neo-cubism, pop art and mural art.

For every work that seems classic Ybarra-like, there is another in which he stepped outside of his artistic box and created something entirely different—injecting humor, travel mementos, and even social justice into the back story.

The important thing to Ybarra is that he continues to create.

“If you’re really passionate, don’t give up,” he says, leaning forward in his chair. “I just keep painting. I don’t really want to stop.”