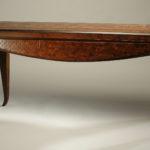 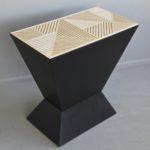 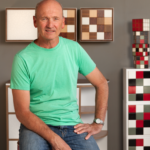 In the garage-turned-workshop off his 1920s Phoenix cottage, furniture designer Kevin Irvin makes the utilitarian beautiful, one cut at a time. Irvin’s hand-hewn cabinets, tables, benches, consoles and storage boxes are simple shapes with eye-catching design elements that elevate them from pure functionality to works of art.

Irvin is truly the “artist next door,” and appropriately so. Growing up in tiny Fort Branch, Indiana—population 2,500—he didn’t know anyone who called themselves an artist, but he certainly knew many people who could make things with their hands.

“I always loved to draw, and I have a particular interest in mechanical drawing,” says Irvin, “but the closest thing to art that I was exposed to were billboards. I would have liked to take art classes in high school, but in those days, the message was that business was my path.”

At the University of Southern Indiana, an art degree wasn’t offered, but he did sign up for an introductory art class. That first day, he thought he’d accidentally wandered into a wood shop class. As it turns out, that Design and Materials class was about to change his perspective and his life path. The professor, John McNaughton, showed slides of his work—fantastical furniture that was more sculptural than utilitarian.

“I couldn’t believe what I saw,” says Irvin. “I’d never seen furniture that way. I was entranced by the sculptural nature of it. John made me see the possibilities. My first piece was a coffee table — which actually ended up being published — but I didn’t make another piece of furniture for the next 15 years.”

McNaughton became Irvin’s mentor and remains a good friend today. As Irvin learned to design and draw, he found inspiration from greats like George Nakashima, a father of the American craft movement, but, closer to home, USI welcomed graduate students from around the country who influenced him greatly.

“It was an incredible experience,” says Irvin. “I was lucky to find that in such a small school setting because it was like a graduate situation. These older men and women had their own fortés. Their input and critiques were invaluable. I happened to be there at a very good time.”

When sculptor Robert Strini, who Irvin greatly admired, served as a guest professor, graduate school became a topic of conversation. When Strini suggested Arizona State University’s program under renowned sculptor Tom Eckert, Irvin applied and was offered waived out-of-state tuition and a teaching assistant job. It seemed like the right move. He set out in 1982 to spend “just three years” earning his MFA in the desert.

“I’d never been west of the Mississippi,” says Irvin. “I never intended to stay, but at the end of those three years, I had my thesis exhibition, I’d been winning shows, and I was asked what my next step was. Moving to Los Angeles or New York City seemed the logical next step, but the expense of such a thing was daunting.”

When a local friend offered the use of his garage as a studio, Irvin decided he could take out a loan and get started much more effectively if he stayed in Phoenix. With a $10,000 to purchase tools, Irvin had his first show within six months. Once again, he was perfectly situated for success.

“Scottsdale, at the time, was one of the three or four cities where having a show really got you noticed,” says Irvin. “Elaine Horwitch attended one of my shows and signed me to her gallery, which was a major presence at the time.”

After years of creating exclusively sculptural work, his first functional piece was exhibited at the Horwitch/Neuman Gallery in 1995.

Irwin and his wife, Erin, adopted their daughter Sadie, now 8 years old. When the economy rendered big changes in the art world, Irvin, true to his artist’s soul and practical Midwestern roots, decided it was time to start a new chapter.

He began designing and building functional, design-oriented production pieces that were unique to him and could be offered at a reasonable price point. His work is streamlined, but the texture and detail make his work stand out as something artful, artisanal and, quite literally, not run-of-the-mill.

First came the Maze Box, a multipurpose storage cabinet faced with a hand-carved, maze design in various colors from red koto, walnut and maple that lend themselves to a variety of arrangements. The same design is now used to top side tables (his Tux Table is among his best sellers), coffee tables, benches and consoles.

The box caught the attention of the curators at Artful Home catalog in 2009.

“I was a bit apprehensive about selling online,” says Irvin. “I was used to galleries where buyers could see the pieces in person. Who would make a purchase from what, at the time, was a small thumbnail photo on their computer screen?”

As it turns out, there was plenty of interest. Within the first five minutes, he received a $5,000 order.

“The Artful Home folks told me, ‘This never happens,’” says Irvin. “I’ve had steady orders ever since. I don’t keep stock. Everything I build, I sell. It’s been a great relationship and I ship pieces all over the country.”

Museums and private and corporate collectors, including the Scottsdale Museum of Contemporary Art, The Evansville Museum of Art, McDonald’s Corporation and Neutrogena have included his pieces in their collections.

Irvin’s favorite aspect is the design process, which harkens back to his affinity for mechanical drawing and Euclidian geometry. He usually begins with a three-dimensional cardboard rendering, then moves and rearranges segments to get just the right marriage of form, function and production-friendly construction.

The Maze Box concept paved the way for a wide selection of variations on the theme. The Botanical Box is similarly constructed, but Irvin cuts and applies 140-160 individual wood veneer shapes that give the effect of wind-swept leaves blowing across the fronts of the cabinet.

The Studio Box allows buyers to bring a bit of Irvin’s creative process into their own spaces. The door fronts are repurposed sections of Irvin’s workbench, which he replaces once or twice per year. The bench is cut into equal squares, its randomly marred and stained pieces arranged to obtain the best effect.

Also among his creations are decorative items, custom pieces, and even delicate Christmas ornaments. Irvin says he still has sculptural work in him, but for now, fatherhood and furniture production keep him busy. It’s rewarding to see the response to his pieces.

Gone are the doubts about living in the desert he had in his college years. Life in Arizona agrees with him and he takes full advantage of the weather.

“I love outdoor living and being able to work outside nine months out of the year,” says Irvin. “Eventually, I’d like to build a showroom on my property so that buyers can see pieces in person. I’d love to create a full line of furniture with a design focus, and I have ideas that I’m solidifying toward that goal. Whenever there’s a lull in production, I get creative.”