Larry Fitzgerald: From the Gridiron to the Green 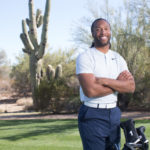 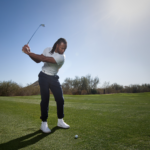 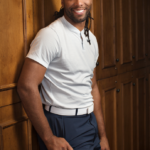 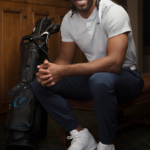 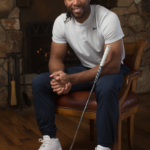 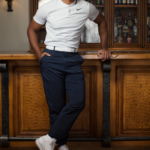 If you live anywhere in Arizona, you know that Larry Fitzgerald is more than kind of a big deal, on and off the field. He’s dedicated his entire professional career to the Arizona Cardinals and his personal time to charitable causes. He’s breaking records and earning a reputation both as a football great and an all-around good guy.

Turns out he trades in the pigskin for a much smaller ball and a much bigger turf.

For the last few years, golf has been the third love in Fitz’s life—the first being his 10- and 4-year-old sons, and the second, of course, being football. He’s a regular on several Phoenix area greens, as well as on fairways in his (other) home state of Minnesota.

Like everything he does, when Fitz is on the course, he gives it 100 percent. He’s gotten so good that he and Valley PGA Tour pro Kevin Streelman took the AT&T ProAm title last month. Had he not already been a celebrity, ESPN cameras would have turned him into one as he and Streelman defeated the next runners up by an impressive seven points.

Larry’s been a fan of Images Arizona almost as much as we’ve been fans of his, so as the 2017 NFL season came to an end, he invited us to meet him on the back nine of Whisper Rock, one of his favorite courses, just days before the ProAm and his exciting announcement that he’ll be returning to the Cardinals for the 2018 season.

Fresh from a little friendly competition at Whisper Rock, Fitz entered the clubhouse with his trademark dreads tied back, neatly framing his signature grin.

He ordered a lemon-lime Gatorade from clubhouse staff and pulled up a chair. Nike, one of his sponsors, would have given a big nod to the blue golf trousers, white belt, white shoes and white polo shirt he was sporting, all with their trademark swoosh.

First, let it be said that Fitz is truly as genuine and kind as his reputation suggests. He was keeping a tight schedule in order to pick up his sons from school, but he didn’t appear to be rushed or impatient. It was par for the course (no pun intended) for the football superstar, who seems to have made peace with the constant pull of responsibilities and appearances.

When it comes to golf, Larry doesn’t mess around. He began playing four years ago and has thrown himself into the game with the same intensity he’s known for on the gridiron, taking lessons from the best, honing his swing and becoming a skilled player.

“Right now, I have a 10 handicap,” he said. “I didn’t even keep track at first. It was just bad. Really though, when you’re out with the boys, the score doesn’t matter. I come out here so I can feel the sun shining on my face and to hang out with my friends for four hours.”

I have to admit, I was confused as to the allure of golf for someone known for physicality and speed.

“For a long time I thought golf was too slow,” he said, anticipating the question. “Then I played for a charity event and I’ve been hooked ever since.

“I love what the game stands for: integrity, honor and honesty. You can never beat a game of golf, no matter what the score. It’s a test of your resolve, and it’s all on you. Nobody else can motivate you or help you out; it’s just you playing against yourself.”

Camaraderie is part of the draw, too. “I also like golf because you see people’s highs and lows. It’s the best four-hour interview you can spend with someone; in that four hours, you get to know a lot about the people you’re playing with.”

Surprisingly, there are even a few things that golf teaches Fitz about Fitz.

“There are days I cannot hit the ball,” he said. “In football, even when I was young, I never had to worry about whether or not I could catch the ball or run. Golf is a different kind of challenge. It doesn’t always go the way I think it should go.”

Though Larry enjoys his time on the golf course, his primary allegiance is to his family.

“My life revolves around my kids,” he said, and it was clear he meant it. “They love spending time with me in the back yard, playing in the batting cage or shooting hoops. I don’t think I’m any different than any other parent. I want my kids to be healthy, honest people who grow up and contribute something positive in the world.”

Fitz is a tremendous role model for many young people. His charity work and on-and-off-the-field ethics stand out among the crowd, but in his mind, he is one of many athletes kids can aspire to be like.

So who do you look up to when your dad is Larry Fitzgerald?

“I see my kids’ eyes light up when they see LeBron James or Steph Curry—players like that—at games. They’re like, ‘Dad! It’s LeBron! It’s Steph!’ There are definitely still guys out there who my kids are looking up to,” he said.

“There are so many wonderful guys in the NFL and in other professional sports,” he added. “It’s unfortunate that, most of the negativity, it’s the 1 percent. If you think about it, there’s 1 percent bad in everything you do. Unfortunately, it’s often the negative things that attract attention.”

As for Fitz’s own role models, it wasn’t sports figures or movie stars who he respected most.

“I didn’t have to look any further than my own mom and dad,” he said with the virtue and character we’ve all come to know and love from Number 11.

“My parents met in high school and got married after college. My dad was able to follow his dream to be a sports journalist, and my mom was a teacher.

“I didn’t have to look any further because my dad is an honest, truthful man, and he and my mother taught my brother Marcus and me love and respect. Neither of them took short cuts when it came to anything we did. My mother was highly involved in charitable endeavors, and they were both loving parents.

“We had great balance in our lives because of my parents. We got to see sports, and we also got to see genuine compassion and caring through both of them.”

As for Fitz’s future, he says that not even he knows what it will hold. He will celebrate his 35th birthday in August, and he’ll be sporting Cardinal red for his 15th season of playing pro football.

For now, in the sweet interval between seasons, he’s content swinging a club. He’ll always be a legend on the field around these parts—and if his luck and hard work pay off, he may one day be a star on the golf course, too.