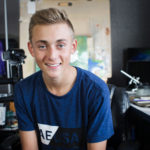 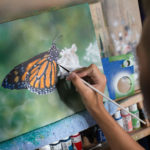 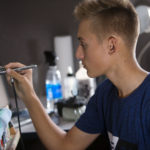 The brilliant blue feathers of a macaw, the glistening red eye of a tree frog and the individually nuanced threads of fur on a cougar cub—they’re all part of Kyle Cass’s ever-expanding body of work. The collection is especially impressive considering that the artist is just 15 years old. Throw in the fact that Cass is colorblind and it’s practically astounding.

“I began drawing at a young age,” says Cass. “It’s a credit to my mom’s different approach to education. She has always encouraged me to be hands-on, think for myself and to try new things. I was always drawn to realism in art, but first worked exclusively in graphite.”

After seeing an artist on YouTube using professional-grade colored pencils to create extremely realistic drawings, he was determined to give color a try. For someone with protanopia color blindness, a reduced sensitivity to red light, it proved to be a bit of a challenge.

“I remember completing a still-life drawing of a red apple in art class,” says Cass. “I finished the piece and I was really proud of it. I brought it to the teacher, who said, ‘That’s great, except for the fact that it’s brown.’ I knew I was colorblind, but I thought I had guessed the colors correctly.”

For a long time, he used different ways to keep track of colors (sometimes difficult when his preferred Caran D’Ache pencils have color names written in German), from careful sorting to asking family members to help. He taught himself to blend the colors and completed his first piece in March 2017: a blue and gold Macaw.

“I shocked myself at how well it came out,” says Cass. “I decided that this is what I wanted to do, and more pieces came together. Looking back and seeing the progression makes me happy and inspires me to keep improving.”

When he received EnChroma colorblind corrective glasses for Christmas, his eyes were opened to an entire range of colors he hadn’t experienced before, allowing him to push his talent further and work independently.

“When I put them on, I was amazed,” says Cass. “It was like looking at a color-saturated photo. I lived for 15 years without seeing true colors. I saw purple for the first time. To go back and look at the work of my favorite artists and seeing it as it was meant to be seen was very moving.

“For my own work, it was like seeing it for the first time. There were so many changes I wanted to make. I’ve fallen in love with using warm highlights and cool shadows. Now, I can manipulate color to how I want it to look. I don’t have to guess whether it will look right to someone else.”

In addition to colored pencils, Cass uses acrylic paint (applied with a brush that is so thin, it mimics the point of a pencil), airbrush and watercolors. He has created quite an extensive volume of work in just this past year.

His family has been supportive of his talent. While he has lived in Anthem for a majority of his life, he has family roots in South Dakota where his grandparents still live. The wildlife of the area continues to be a primary inspiration, evident in his depictions of buffalo, moose, elk and deer.

His grandparents commissioned the first piece he sold and have become investors in his career. Cass has weekly business meetings via telephone with them and is learning about the ins and outs of taxes, marketing, websites, copyrights, sales and print production.

The business and promotional side of art presents a huge learning curve for a teenager, but Cass enthusiastically takes it in stride. He has procured photo licenses for his drawings and works to find royalty-free music for his popular videos on Facebook and Instagram.

He has received positive feedback from as far away as Sweden, Russia and Brazil. The process for “Springtime Curiosities,” depicting a pair of cougar cubs, received well over 3,000 views. He’d like to start a YouTube channel and add spoken introductions and concluding narration in order to create a more personal connection with potential collectors.

“Whether they’re into art or not, people love to see the time-lapse process,” says Cass. “I’m also interested in cinematography, so constant improvement in video quality is a focus for me, too. It’s part of developing a quality brand. I’m still building my resume, getting my name out there and seeing how people respond. I’m proud of what I’ve accomplished so far.”

A single piece can take Cass up to 60 hours to complete, and he works on each one over a series of weeks. He utilizes a combination of in-person and online classes to free up time for art, but also participates in golf and volleyball at Boulder Creek High School and is interested in math, science, drones and cinematography.

Amidst all his activities, Cass has found ways to get his work noticed. He recently received first place in a show at the Anthem Civic Center for his “Forest Guardian,” and his drawing of a blue macaw, entitled “Something Blue” was displayed at the Arizona State Fair. He has displayed his work at the Anthem Days festival and will be part of the Deer Valley Unified School District Art Show in April.

“The thing that’s interesting about Kyle is that an analytical mind isn’t usually an artistic mind, but he is the perfect blend of both,” says Cass’s father, Joe. “You can see it in his artwork, in his attention to detail and technical realism. That’s kind of the mystery of Kyle. It’s been fun to see him grow up and it’s going to be interesting to see what he does in the future.”