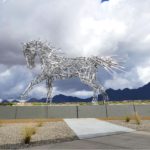 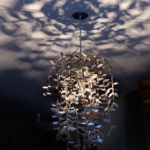 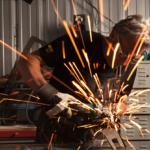 While many artists gain endless ideas from one central concept, Scottsdale-based sculptor Jeff Zischke, whose work appears throughout the Valley and around the world, is simply inspired.

Jeff’s Scottsdale home both displays and stirs his work. His sculptures in a variety of sizes and styles greet my arrival. Inside, a series of cozy outdoor veranda and garden spaces fill the one-acre lot that Jeff and his wife call home.

“I love outdoor spaces. Each one has its own specific attitude, theme and environment,” Jeff comments. “Some are more refined and some are more ongoing, and they always include design, artwork and planters.”

The areas they create accommodate alfresco dining, company and conversation, as well as contemplative time in the midst of Sonoran beauty. They’re among Jeff’s many creative outlets, and as he designs and grooms them, they give back in the form of visionary juices.

One veranda doubles as a display for Jeff’s robust collection of antique lights. Rusty little lamps, some with stained glass, others dating back to World War I, hang from an angled iron shade structure. In another area, the kind of seed pods that sparked the idea for his Sonoran Sea Pods sculptures, on display at George “Doc” Cavalliere Park, carpet the ground.

Displays of Jeff’s 25 or so years of work dot the backyard. There are classics, like a cabana prototype that he designed for the W Hotel, and there are newbies, like his latest innovation: simply elegant outdoor benches that double as planters. They look like concrete, but are actually crafted from steel.

This is also where Jeff built his studio and workshop, which looks onto the pool. Inside, Jeff’s studio is chock full of sculpture models. Some are prototypes of projects that came to fruition, while others did not. They are miniatures of work recognizable from throughout the Valley, like “Impulsion,” a larger-than-life sprinting horse made for the entry feature of WestWorld’s Equidome Arena.

“I love quests,” Jeff says about the process of winning projects like that at WestWorld. “I like a design challenge, but I also like to create from pure inspiration.”

On the day we meet, Jeff receives notice that he won another public art project: a 50-foot-tall desert bloom sculpture made of aluminum tubing and fiberglass, commissioned by the City of Peoria. The permanent piece, which will greet drivers as they head to Lake Pleasant Regional Park, will be illuminated by computer-controlled, colored light-emitting diodes. Pending approvals, Jeff estimates it will be on display by the middle of 2018.

Jeff was also recently awarded a Chandler Museum project in which he will design a modern 75-foot by 65-foot shade structure with a ceiling that emulates waves. The project is slated to be completed by summer 2018.

“I’m always entering stuff,” he notes. “You have to constantly be entering public art competitions. That’s what I do, and that’s what I love. I know people who have been doing variations on the same theme for 30 years. I could never do that. I love the challenge of the next thing.”

In the corner, there’s a pile of car parts. Jeff explains that he’s transforming them into sculptures for a commissioned project—something he’s never done before.

“What a challenge!” he says. “That’s what it should be, I can’t stand doing the same thing. The competitions are always different and I get to work in different materials.”

Which explains why marble, steel, plastic, cloth and every material in between lay around the studio.

Chances are good that you’ve seen one of Jeff’s finished products. In downtown’s über cool Found.re hotel, there’s Jeff’s 8-foot lime green T. Rex sculpture, and if you’ve placed head-to-pillow in one of its penthouse suites, you may have played with the interactive magnet squares Jeff designed. Some are patterns, others are a mish-mash of celebrity faces, and all are fun. His other design project locations include Axis/Radius, Sanctuary nightclub and Zen 32 restaurant and bar.

The sculptor and designer studied ceramics and painting at Eastern Michigan University and showed at art fairs in his early career years.

“That helped hone in my style and skills,” he explains.

His inspiration draws from organic shapes and modern technology.

“I’ve always been into the computer stuff, thank goodness,” Jeff says, adding that it’s not only enriched his work, but also made it possible for him to create three-dimensional models. “People can see, ‘Oh, this is what it could look like,’ and that’s really, really important.”

Jeff combines bamboo, plastics, steel, computer-controlled lights and a wide range of other materials to create interactive installations that respond to the natural and urban environment, which is especially apropos in the Valley. He uses his work to invite people to form a personal and dynamic relationship with the art and the place.

“Each project becomes tied to its environment through the use of local materials and working processes, strengthening community connections,” Jeff remarks.

His work has been installed in France, Serbia, India and Japan, as well as throughout the Valley and other cities. Milan’s Salone Del Mobile, The Guggenheim Museum in New York City, and The Designers Block in London are among the exhibitions where his work is showcased.

Jeff is brimming with inventive imagination. Among his other impressive projects, he created Groovebots, a cast of colorful decorative animal characters in a variety of sizes and materials.

It all starts with Jeff’s daily morning hike.

“That’s where the ideas come,” Jeff shares. “I do almost the same trail every day, five days a week. I see something new every day. I get ideas walking there, and that’s how things start with me.”

His latest passion is Zortado, a unique coffee shop that will serve Spanish- and Portuguese-style coffee with Jeff’s personal twist. The space will also display his work.

“It’s exciting to work on a conceptual store space that is also a gallery,” he explains as he hands me a sample of the coffee he plans to serve—an antique pastis glass filled with the best coffee I’ve had outside of Italy.

Laid on top is a candied ginger; it sweetens the coffee in a unique and terrific way. As I take a sip, I experience Zortado’s alignment with Jeff’s art—it has depth, yet it’s fun, one-of-a-kind and is always on the cutting edge.