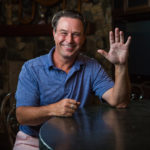 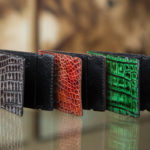 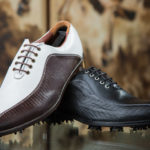 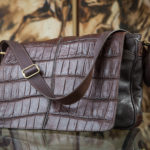 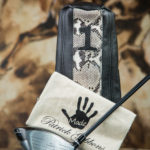 Whether it seems like yesterday or decades ago, in 2008 you were likely affected by the housing collapse and economic recession. For North Scottsdale resident Patrick Gibbons, it marked the end of a flourishing business and successful career in land development, but it was also a chance to shake things up.

“I thought, here’s an opportunity to do something different with my life,” Patrick recalls. “So I asked myself, ‘What would you do tomorrow if you could do anything?'”

The answer came quick and easy: golf. Patrick was not on track to be a professional golfer, but he had an appreciation for high-quality golf accessories, thanks to his grandfather. In fact, at the end of his life, Patrick asked his grandfather to leave him one thing: his golf bag.

“It was an old bag that he had for decades, but I liked that it was made in the U.S., and that it had a quality that had nothing to do with today’s disposable society,” he says.

Starting with putters, Patrick began handcrafting made-to-order leather putter grips from his DC Ranch garage. Then the requests for matching head covers came in and from there, his online store grew into what is now a line of 45 ball markers, cash covers and other golf and fashion apparel and accessories – including 18 types of golf, business and hand painted belts that come in a variety of high-quality leathers, stitches, colors, widths, lengths and other options. The belts, which emerged as his most popular item, are custom ordered and handmade in the United States by eight artisans. The putter grips are still crafted by Patrick.

“I don’t think that there’s a lot of quality products made in the U.S., and jobs are disappearing as a result,” adds Patrick, who tells us he strives to make the products last.

It comes at a price, he’ll admit, but he explains that like his grandfather’s golf bag, he wants everything to have the quality of a golf heirloom.

“This is something that could be handed down or displayed on a shelf,” says Patrick. “Good leathers don’t wear out, they wear in. My items have a quality that you can’t find at a big box store.”
His grandfather’s bag is also a reminder of the lessons that came with it.

“We would go out to the course or jump the fence and play the same three holes on the course in his backyard in Bay City, Michigan,” Patrick reminisces. His grandfather would cut clubs down to kid sizes and cap the new ends off with duct tape.

When Patrick started his new business, this wisdom came into play.

With time and personal growth, Patrick sunk his teeth into his new venture. Persistence and stubbornness, he advises, made the difference. Today, every belt is stamped with his mantra, “Aut inveniam viam aut faciam,” which translates to, “I shall either find a way or make one.”

Patrick has a strong following to show for his hard work. There’s even a group of Patrick Gibbons Handmade addicts, customers who order belts weekly – often even before their last order has arrived. Some have their own mantra stamped on the inside.

“They enjoy seeing what they can come up with,” says Patrick. “They like to see what’s next.”

Although he won’t name names, his customers include hundreds of PGA, LPGA, Web.com, Symetra and Cactus Tour professionals.

“It is absolutely my vision coming true, being part of the golf community,” says Patrick. “Sometimes I am traveling to California to play a round of golf with a tournament organizer to brainstorm gifts for his next event, and some days I am in a PGA locker room taking an order from a golf player.”

Patrick also enjoys seeing the hard work of young golfers as they strive to emerge.

“They’re being persistent and stubborn, and they’re not quitting,” he says. “Some shoot to the top, but the ones I relate to are the ones that know what they want and they don’t give up. They’re finding a way.”

In 2014, Patrick decided to help others by dedicating a percentage of sales to Helping Hands, a charitable arm that has donated money to charities such as Hope Kids, Gracious Gifts and, most recently, toward an education for his best friend’s daughter, who lost her father in March. Now the original vision expands further.

“If someone told me that I was going to start a high-end leather company in one of the worst economies in our history, I would never have done it,” he says. “Now it’s all part of the vision: to be around the game, play it and make a living doing it.”