Getting to Know You: Diamondbacks Pitcher Archie Bradley 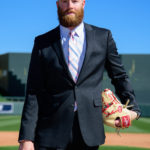 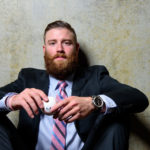 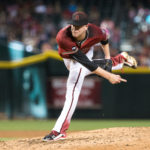 It’s March in the Valley, which means you can count on three things: temperatures in the mid-80s every day, throngs of out-of-state visitors filling ballparks from Scottsdale to Surprise, and plenty of locals playing hooky from work to get in on the fun.

As Cactus League spring training gets underway, we also know a certain team in Mesa will still be partying months after its first World Series in more than 100 years. But as for the local team, fans aren’t sure what to expect.

Long gone are the famous D-backs names like Gonzo and Gracie, replaced with names like Goldy and Greinke. So, we thought it was the perfect time to get to know one of the team’s up-and-coming pitchers, Archie Bradley.

Beginning his fourth spring training with the club, Bradley is coming off a 2016 season that saw him go 8-9 in 26 starts for the D-backs. He had an earned run average of 5.02 with 143 strikeouts and 67 walks. He completed the season with a 4-1 mark and four no-decisions. In defeating the Padres on his last start of the season on October 1 at Chase Field, Bradley recorded a career-high with 11 strikeouts and struck out at least one batter in each of the seven innings he worked.

For the 2017 season, Bradley remains in the conversation for a spot among the five starters manager Torey Lovullo will name by opening day. We caught up with the 24-year-old right-hander as he played a round at McCormick Ranch Golf Club in preparation for last month’s Annexus Pro-Am at the Waste Management Phoenix Open.

Q: So, you’re playing golf right now? How often do you play? Do you prefer baseball or golf?

A: I started playing back in Oklahoma when I was 14, but I’ve been playing a lot more since I knew I was playing in the pro-am. My handicap is probably around a 12. I can hit it long off the tee, but accuracy sometimes becomes an issue. Of course, spring training is always a great time to get out on the course, play with teammates and friends, and just have a good time. Baseball is my favorite sport and it always has been. When I was around 10 years old, my dad got me a pair of turf baseball cleats and since then, I’ve been hooked. They’re both great sports though.

Q: What’s your favorite golf course in the area?

A: Kierland. It’s always in beautiful shape, well-manicured and the people always treat us well. Plus, I live about a mile down the road.

Q: Are there any similarities between pitching and golf?

A: For sure. I know there are teammates behind me when I’m on the mound, but just like swinging a club, when you’re throwing a pitch it’s all on you until the ball is hit. You control everything, and you decide everything. But the biggest similarity is when you throw a bad pitch and give up a hit, you have to forget it. The same is true with golf. If you hit a bad shot, you have to forget it and find a way to salvage it and put yourself in a good position. I’ve always said, if I could keep the same composure and have the same mental approach to golf as I do in baseball, I’d be a much better golfer.

Q: What do you miss most about your hometown in Oklahoma?

A: Like most people, I miss friends and family. There are people still around there who helped me get to where I am right now. It’s my comfort zone. I also do a lot of hunting in Broken Arrow. It’s a place I love to be. But it’s 68 degrees in February, and I’m playing golf in shorts in Scottsdale right now. I love it here.

Q: Spring training is coming up at Salt River Fields. What’s your favorite part about this time of year?

A: Throughout the season, you bond and get close to your teammates. Then during the off-season, everyone goes their separate ways and we aren’t in contact as much. When spring training comes around, it’s exciting getting to see your teammates. It’s the optimism of what the team could be, new management, new front office. It’s a fun time to be around, and it means baseball is right around the corner.

Q: You mentioned the new management. What are your initial thoughts on general manager Mike Hazen and the staff?

A: I’ve had limited interaction with them so far. But when I talk to the public relations team and other coaches, they have nothing but good things to say. It’s nice to know the people above you are the right people for the job.

Q: Do you see yourself as a starter or reliever this year?

A: I’ve always been a starter. That’s what I’d like to be, but I’m here for whatever they need. If they want me in the bullpen, I’ll go to the bullpen. If they want me to start, I’ll start. I just want to be a part of this team and help them win in whatever capacity I can.
Q: From your standpoint, what are the goals for the team this year?

A: I think we learned our lesson from last year about ignoring all the expectations from outside. We just need to form a competitive roster and put a team out there that this city and this state can get behind and root for again. We want to make baseball in Arizona competitive and fun again.

A: Fastball. The old No. 1. The heater. I’ve been getting up to 92-97 mph. I have been making tons of strides with the change-up, though.

Q: What would you be doing if you weren’t a pro baseball player?

A: Well, I committed to play quarterback at the University of Oklahoma before entering the Major League Baseball draft. So, I’d probably be playing football, or hunting, or coaching. Those are my passions outside of baseball. I’ve always had a huge passion for baseball so I’m so glad I get to dto be my favorite breakfast spot, Butters Pancakes and Café at Hayden Road and Via de Ventura. My teammates and I are frequent visitors there.

Q: Are you married?

A: No, but I have a girlfriend whose brother was actually my first roommate in pro ball. He’s now in the Cubs front office. I have three guys who live with me, sometimes it’s four, sometimes it’s five, and we just have a good time.

Q: What’s the story on the beard?

A: I did the whole No-Shave November thing and my teammate Robbie Ray was always pushing me to grow one, so when November ended I just made up my mind to just let it grow.

Q: You went from Missoula to Reno to the big leagues. What’s your greatest lesson from playing in the minor leagues?

A: It was an amazing journey. Too often, I think we all get caught up in trying to make money and make it to the big leagues, which is great. But the ride itself – the five or six years I’ve been in pro ball – has been an unbelievable journey. The friendships. The hard times. The ups and downs. The stories. The fun times. Being called up, being sent down. I don’t take any of it for granted. I cherish every day I get to put on the uniform. And I try to make the most of it because you never know when that day will come when you have to hang up the cleats.

The D-backs will be playing home spring training games through March 27 at Salt River Fields at Talking Stick. The regular season schedule begins April 2 at Chase Field, when the D-backs host the San Francisco Giants.