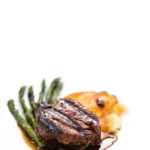 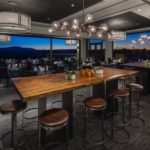 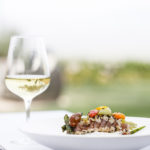 As the signature restaurant at Copperwynd Resort in Scottsdale, Flourish reigns high over the gorgeous views of Fountain Hills with a quiet stateliness. The scenic restaurant with glass surrounds is the culinary playground for Flourish’s executive chef, Richie Sica, who incorporates several specialty menus at the restaurant.

Trained at Le Cordon Bleu College of Culinary Arts, Sica previously worked his culinary magic at The Keg, McCormick & Schmick’s Seafood and Steaks, and Fleming’s Prime Steakhouse. After working as the executive chef at Sonata’s, he joined Flourish in August 2017.

Since coming to Flourish, the chef had a chance to completely reboot the menus twice. “It’s more of a seasonal menu change,” says Sica. “I’m doing fall/winter and spring/summer menus.”

In staying seasonally focused, he capitalizes on fruits and vegetables that are at their peak. He is also focused on elevating foods that people already love.

“I like to create dishes that are crowd favorites. I don’t really have a restaurant that is specifically one kind of cuisine. I have the opportunity to go to either side of the spectrum to create something special.”

He does like to work outside his comfort zone and create things that are different, yet appealing, like his cauliflower steak. “I think outside of the box with some of these items, sprinkling in selections that appeal to those with dietary restrictions,” says Sica. “I’ve had an overwhelmingly positive response, and we have items on our menu that cater to any kind of dietary restriction.” If a guest sees an entrée they would like slightly modified to meet a dietary need, Flourish will do it.

Local sourcing from places like Abby Lee Farms and Toasted Mallow in Gilbert is important to him. He recently planted cucumbers, lemon thyme, Thai basil, cauliflower, tomatoes, peppers, squash and more at a community garden in Fountain Hills.

“We bought a couple of plots in the garden and I went to Verde Valley Nursery. I’ve now planted many things,” says Sica. He was disappointed that he wasn’t able to plant a lime tree in the community garden, so he found a spot out by the back dock as a home for the citrus tree.

“We make everything from scratch here. I don’t like anything from a can,” Sica explains.

Flourish has menus for breakfast, brunch, lunch, happy hour, dinner, dessert and cocktails. Each menu can be reviewed and discussed by the knowledgeable world-class servers, some of whom have been with Flourish since it first opened.

The lunch menu includes a wild twist on the typical. The green goddess turkey burger truly lives up to the green portion of its name. Whereas turkey burgers can have a reputation for being dry, the Flourish version swings the other way and is in a class by itself. It includes avocado, romaine, Swiss cheese, fried green tomatoes, green onion and cucumber, all topped with a green goddess aioli and tucked into a brioche bun. The Brussels sprouts with Worcestershire gastrique, cotija cheese and a sprinkle of truffle oil are also not to be missed.

One particular dinner menu item which Sica created while he was with Fleming’s—and is still quite proud of—is the pistachio dill-crusted sea bass with an orange champagne butter sauce. “A nut grower from California ordered it and he liked it so much, he got the recipe from me and published it in their own recipe book,” says Sica.” That corvina sea bass is now available at Flourish.

Another standout dish is the Flourish filet orchestrated with au gratin potatoes made from Sica’s own recipe using pepper jack cheese. The tender fillet is dusted with porcini mushrooms, kissed with red wine demi-glace and served with grilled asparagus. Sesame crusted tuna, short rib pappardelle and lobster scallops with vegetables are just some of the entrees that guests can choose from on the dinner menu.

Sweet endings at Flourish are just as spectacular as the massive Fountain Hills fountain that can be seen from the Flourish restaurant and patio. Tableside s’mores with locally made marshmallows are always a hit, as is the chilled lemon gingersnap pie.

“It tastes almost like limoncello,” says Sica. “The pie was incredibly popular at the Arizona Wine and Dine event at Kierland. This dessert is the perfect complement for the warm weather and it goes really well with white or dessert wines.” Carrot cake, crème brûlée and a trio of cheesecakes round out the dessert menu.

Wine pairing dinners are held at Flourish on the second Thursday of each month and are routinely attended by 30 to 40 people. Reservations are highly recommended.