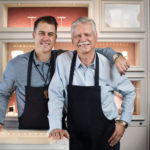 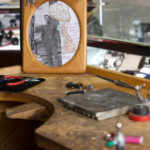 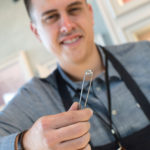 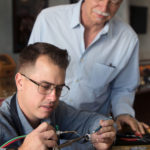 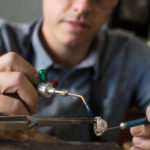 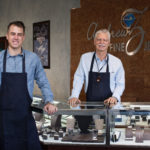 On the corner of a well-worn jeweler’s bench is a black and white photograph of a handsome young man in a military uniform. His hair is neatly groomed into a single wave and polished with pomade, and even without color, the sun gleams brightly from the gold buttons on his jacket. In the corner, handwritten in once-black Bic pen ink is the notation, “1943.”

The man in the photo is John Zychowski, now remembered lovingly as “Papa.” Born in Poland, he left for England at the start of WWII and joined the Polish division of the Royal Air Force. While there, he met a woman named Margaret, who stole the young soldier’s heart before he left for America to fight with the U.S. Air Force.

John didn’t forget about Margaret, however. After the war, he returned to England to ask for her hand in marriage. Together, they returned to the United States, where John used his GI Bill to learn to make watches.

John used that knowledge wisely. In 1949, he opened a jewelry store in New York. Along the way, he and Margaret raised four children.

John’s store was a neighborhood-kind of store, where John knew his customers by name, and he was trusted to repair people’s most valuable items. He knew first who would soon be getting engaged, and he knew who was getting what on holidays and birthdays. There are many different jewelers around the world similar to John who try their best to put personal touches on their jewelry for their customers, visit Jess Jewelers to see more or search online for your local jewelers.

The stores were a family affair, and even the children helped. After school in their early years, they stocked displays and helped to clean the stores. Once they were in high school, they took on more responsibilities during summer breaks.

They worked hard, and in exchange, he taught them about more than just the value of diamonds and gold.

One of their sons, Andrew, thought he’d forge his own path separate from the jewelry business. He went to college to become a structural engineer and did well. A few years later though, he realized that his heart was firmly rooted in the business he’d known his entire life.

After 26 years in the business, John handed his keys over to Andrew who, along with his wife Beth, began raising their sons and daughter in much the same way he had been raised.

On weekends and during breaks, their children Scott, Kyle and Stephanie buffed jewelry and changed watch batteries, and they learned the same valuable lessons about jewelry—and about life—that define them today.

In the early 2000s, lured by the idea that winter was optional, the family left the bitter New Jersey cold and moved to Anthem. Unsure if he wanted to stay in the jewelry business that he loved, or settle into a structural engineering job where an income was guaranteed, Andrew followed his heart. He opened a small office from which to do jewelry repairs and sales, and opened it by appointment only. Within a year, he had his own store, Andrew Z Diamonds and Fine Jewelry, in Anthem’s Safeway Plaza.

When Andrew first hung his shingle in 2004, Anthem residents were pioneers of sorts. His was among the earliest families who’d dared to venture so far north of Phoenix city lights.

“Back then, everyone was connected to everyone else,” he says. “It was the kind of place where I could say, ‘Hey, I need some landscaping. If you do that for me, I’ll exchange some jewelry for your wife for Christmas.’”

Things may be different today, but at Andrew Z, Andrew, his family and the Andrew Z staff are doing their best to cultivate the neighborhood friendliness that his father was known for in Manhattan.

He graduated from the prestigious Gemological Institute of America and is an IJO master jeweler, but for Anthem and the surrounding communities, he’s so much more. He’s become a trusted friend and confidant, and like his father, he has earned his standing as a trusted and valued professional—one who puts integrity first, and whose value comes from virtue.

Ask anyone in Anthem what Andrew Z Diamonds is known for, and you’ll likely hear that it’s their annual Christmas gift giveaway. This year marks the eighth year that Andrew and his family will hide gifts ranging in value from $20 to about $400. Clues are posted on social media, and crowds of people scramble to find them in parks, stores and other strategic spots.

“It gets crazy,” said Scott, who started posting clues using Facebook Live last year. “I have literally watched what must have been 50 cars pull up and everyone rush out at the same time.”

Sometimes the family sits in parked cars nearby watching the excitement unfold. In recent years, Beth noticed that weekend gift hunters, often out in early morning hours, were often with small children.

“Mom saw all of these moms getting out of their cars with little kids in pajamas,” Scott says. “My mom can’t stop herself. She’s a grandma. She said, ‘What about the kids?!’ So now, on weekends, we put little toys in the gifts, too.”

This year’s giveaway will begin on Black Friday, in conjunction with the store’s popular diamond stud earring sale, and end on Christmas Eve. It’s one of several ways Andrew Z gives back to the community, and one of the most rewarding.

“One year, a woman came to us in tears after finding a gift. She and her husband hadn’t been doing well, and she said they hadn’t exchanged Christmas gifts in three years. It was the first gift she’d gotten,” Andrew says with a catch in his voice.

“It’s our busiest time of the year, and we hardly have time, but people have so much fun,” he adds. “I thought it would be a one-year thing, but people love it so much that we can’t stop.”

“We’re supposed to be in the ‘make people happy’ business,” adds Scott. “This lets us wrap it up and put it out there.”

From donations to high school clubs, to ProMusica, to Phoenix Children’s Hospital to Rotary, Andrew Z has a strong reputation of giving back.

In 2010, the Anthem Chamber of Commerce, of which he is now vice-president, tapped him with the title “Business Person of the Year”; in 2013, the Anthem Community Council recognized him for Excellence in Community Service.

Like their father before them, Scott and Kyle have developed their own ideas, but the jewelry business is in their blood.

Kyle spends much of his time behind the workbench, doing repairs and developing his own designs.

Older brother Scott has taken on a larger role at the store, learning from his dad how to manage the books and inventory, becoming a master jeweler himself, and carrying on a tradition of unusually personal and sincere customer service.

He’s become an expert at CAD, taking the jewelry design process to the next level. Not only can he help to create the perfect piece, but customers can see what it will look like in a three-dimension view, so they know what to expect, and can tweak the design as they desire.

Now a father of his own, Scott is eager to follow in the footsteps of his father and grandfather. Looking and sounding remarkably like the man in the black and white photograph sitting on his workbench, Scott’s passion is not only about creating a perfect diamond setting or hand-selecting pieces from jewelry shows; its in becoming part of stories.

It’s in helping a young couple find the perfect rings to represent the beginning of their life together.

It’s in hiding gifts for strangers and watching the excitement of discovery unfold on their faces.

It’s in helping a granddaughter turn her mother and grandmother’s diamonds into a keepsake piece that allows her to carry their memories with her.

It’s in passing along the spirit of excellence, diligence and most of all, kindness that his Papa began.

“I’m proud of where we come from and what we do,” Scott says proudly. Beaming next to him, Andrew smiles, and from the corner of the workbench, another proud face, this one on black and white photo paper, smiles too. After all, it’s a family tradition.

Nothing shines bright like a diamond—except a diamond that vibrates as you move. This glimmering collection of pendants, earrings and bracelets is uniquely eye-catching, and the perfect gift for that woman who has everything.

Being on a budget doesn’t have to be boring. Alex and Ani offers personalized bracelets and more that capture personalities and hearts. Great for that special someone, or for sisters, friends, mothers and anyone who loves great, high quality jewelry that doesn’t break the bank.

This 14K gold or sterling silver customizable jewelry never goes out of style! With more than 600 pieces to mix and match, each bracelet, necklace, pair of earrings or ring becomes a personalized piece straight from your heart.

You can’t go wrong with this timeless gift, and Nov. 23, Black Friday, you can take advantage of one of the biggest sales in the Phoenix area. One of Andrew Z’s suppliers is providing him with huge discounts for the day, and he’s passing the savings along to his customers.

Whether you’re looking for something beautifully crafted for her, or something a little techy and stylish for him, these sun-driven watches are proof that sustainability can be sharp.

Nothing is more special than tradition. By repurposing diamonds and other stones from the past into a new piece, you’ll preserve memories and create ever-lasting new ones. Whether you’d like a pendant made from Grandma’s wedding diamond, earrings made from your mother’s ruby necklace, or something uniquely your own, Andrew Z Diamonds and Fine Jewelry has the knowledge, skill, creativity and passion to create something you’ll want to pass on for generations to come. If it’s rubies that you are wanting to repurpose, you could gain some necessary ruby characteristics information on this jewelers site over at the Ruby hub considering all stones have different properties and characteristics making them either easier or harder to work with.