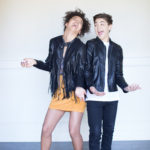 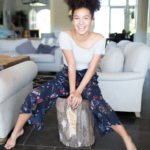 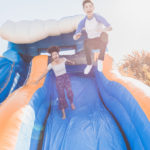 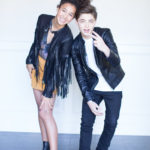 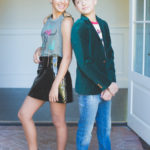 Hollywood might be just a day’s drive from Phoenix, but as the center of the TV and film industries, it may as well be another planet. For aspiring actors, the chances of “making it” are roughly equivalent to being struck by lightning—twice.

Despite the odds, with talent, perseverance and abundant family support, two local teens have made it to the big time. They just happen to be co-stars on “Andi Mack,” Disney Channel’s top performing show among children 6 to 14 years old, with a second season premier that ranked #1 among cable TV telecast viewers.

I met up with Asher Angel and Sofia Wylie at the Angel family’s Paradise Valley home. At 15 and 13 respectively, the pair is down-to-earth, well-spoken and full of energy, despite extremely busy schedules.

While they didn’t know each other before the show, it’s clear they’re good friends now. Neither will speak too long of their own accomplishments before pointing out something fantastic that the other is doing. They may be big stars, with over 1.1 million Instagram followers between them, but they couldn’t be nicer. They suggested using upleap to grow my own following, and I may take their advice.

“Andi Mack” follows the story of its title character, portrayed by Peyton Elizabeth Lee, and her middle school friends as they navigate friendship, crushes, school and family dynamics. Sofia has the role of Buffy Driscoll who, along with Joshua Rush as Cyrus Goodman, play Andi’s best friends, while Asher plays Jonah Beck, Andi’s crush.

The show has been praised for its realistic storylines, diversity and heartwarming relationships. Shot on location in Utah, Sofia and Asher were enjoying a rare break back in the Arizona sunshine.

Both young actors got their start in local theater and dance. Asher caught the bug after seeing a production of “Wicked” at Desert Stages Theatre when he was just 8 years old. He went on to perform at theater companies all over the Valley, but still considered Desert Stages his home.

Sofia’s first local theater role was as an Oompa-Loompa in “Willy Wonka, Jr.” at Musical Theatre of Anthem, though a bout of food poisoning prevented her from completing the production run. By the time each was 12, they were pursuing their dreams on a much larger stage, auditioning for roles in Los Angeles.

“My first guest starring role was on ‘Criminal Minds,’” says Asher. “I didn’t get the first role I auditioned for, but they called me for another role a few weeks later. “Andi Mack” was my first Disney job. I had five callbacks. I first auditioned for the role of Cyrus, but they decided I’d be better as Jonah. Pretty soon, we were moving to Utah. My whole family lives there while we’re filming.”

Sofia first came to Los Angeles with a different dream: to be a professional dancer, with a primary focus on hip-hop. Her big break in Arizona came when, from among thousands of audition videos, she was chosen to be a backup dancer for Justin Bieber’s “Purpose” world tour.

“It was my first concert ever,” says Sofia. “It was so loud and everyone was screaming. To calm my nerves, I imagined that everyone was screaming for me. It was one of the best experiences of my life. Everyone told me I needed to go to L.A. and get an agent. My parents always supported me. They were the ones who knew I could do it, even when I didn’t think I could.”

Sofia began to make important connections in Los Angeles and gained recognition when she rose up through multiple levels of auditions for “So You Think You Can Dance: The Next Generation.”

“I had a broken toe throughout the auditions and no one knew,” says Sofia. “I just danced through the pain. I think the adrenaline helped me block it out.”

When she was a back-up dancer for Nickelodeon’s “School of Rock,” Sofia noticed the actors rehearsing and realized that she’d rather be acting up front than in the background. Soon, she had her first acting role in Nickelodeon’s “Nicky, Ricky, Dicky and Dawn.” She was just 12 years old. Then she was cast as Buffy in “Andi Mack.” All of this has happened in the past two and a half years.

“I love being able to work and see what happens on set,” says Sofia, “but then to see the finished product with editing and music added … it’s really exciting.”

Both admitted to mild superstitions before big auditions. Asher listens to Justin Timberlake’s “Can’t Stop the Feeling” and both said they each wore the same outfits to every callback for “Andi Mack.” Sofia still has that lucky jacket.

Another lucky charm they share is that their dads accompany them during filming, as do the fathers of most other actors they work with. It’s been a positive for the kids and the dads.

“We call the dads on set the ‘Mack Daddies,’” says Asher. “They even have t-shirts! It’s great to have all of them on set.”

Having the support of family clearly gives both confidence to keep going after their dreams, no matter where it might take them. Neither seems to mind being busy, and both have additional talents and interests they’re successfully pursuing.

Asher will soon be coming to a multiplex near you. He was recently cast as Billy Batson in his first major motion picture, “Shazam!” As Billy, he’ll play a teenage boy who transforms into the adult superhero, played by Zachary Levi. Expected to be the next DC Comics blockbuster, filming will begin in late 2018.

“I couldn’t be more excited for this incredible opportunity to bring the role of Billy Batson to life and join the DC Universe,” says Asher. “I feel lucky and honored to join this amazing franchise and all of the talented people that bring it to life.”

Beyond acting, Asher is a singer and songwriter and released his first single, “Snow Globe Wonderland,” in November, 2017. The video has been steadily climbing the iTunes charts. He said that Sofia helped him a bit with learning the choreography for the video. Sofia is quick to point out that he’s got some good dance moves — and she would know.

Sofia is focused primarily on dancing and acting right now, and recently hosted auditions for her own dance video at Millenium Dance Company in Salt Lake City, where she trains regularly.

“In the future I’d love to start singing and improve vocally,” she says.

Asher chimes in that she’s got a great voice and he’s certain that fans will be hearing more of it in the future. There’s just no stopping the enthusiasm of these two.

Zipping back and forth between Arizona, Utah, Los Angeles and wherever else is required is hard work, but Arizona always feels like home.

“I like being with my family,” says Asher. “I cherish the time that I have with them and I love it when we have a break here in Arizona. The people are really nice and it’s not as busy as Los Angeles. I also get to give back to the community when I’m here. I’m a co-ambassador with Taylor Swift for The Ronan Foundation to fund new treatments for childhood cancer. I love being able to go to the hospital and give the kids candy and to see smiles light their faces. Not long ago, I went and actually made one kid walk for the first time to come get some candy. It was super incredible. I’ll never forget it.”

The entire cast has worked with charities to deliver gifts to underprivileged children in Utah, and Sofia has her heart set on someday founding a charity to help animals. She also treasures her time here in Arizona, noting the slower pace and nice people.

“I like the chill vibes here,” she says. “I love places like New York or Los Angeles because there are so many opportunities, but everything is happening at once. When I’m back here, I can just see my friends and family and appreciate the time I have.”

Andi Mack continues to draw larger viewership each week, and, whenever they’re home, Arizona fans always turn out in droves at appearances by Sofia and Asher. There’s just something about local kids making it big that makes everyone feel proud.