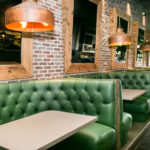 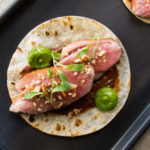 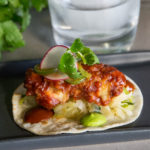 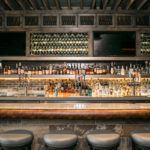 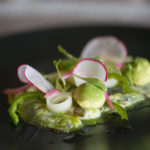 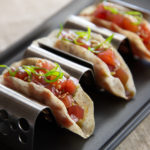 Arcadia’s CRUjiente Tacos is not your average taco shop. It’s something much better. Need proof? San Antonio-born executive chef Rich Hinojosa is a classically trained five-star chef, having led kitchens at some of the country’s top fine-dining destinations, from The Westin Maui Resort and Spa to Aspen Hotel Jerome, a stint at The Phoenician and, most recently, The Wigwam. Hinojosa is a taco champion. His creations have won multiple awards at the Arizona Taco Festival, including first place for his Korean fried chicken taco (yes, it’s on the menu). He and co-owner Jason Morris are certified sommeliers (wine professionals), hence the emphasis on CRU in the restaurant’s name.

“The crunchy tacos are really what started the restaurant,” says Hinojosa. “Jason and I are taco fanatics, and I made these for him when he visited my family and me in Colorado. He immediately said they would be a hit in Phoenix. He asked me what the Spanish word was for crunchy and that’s how we got the name.”
The addictive crunchy (crujiente) tacos, filled with beef, pork or lamb and then deep fried, take 10 hours to make. The meats are dry-rubbed or dry-brined, seared and braised, then hand-shredded and added back into the cooking liquid for ultimate tenderness before folded into waiting tortillas.

“I like a lot of depth of flavor,” says Hinojosa. “It’s a nice, crunchy taco with a juicy interior. The edges of the meat get crispy. They’re delicious — everything you want a taco to be. The street tacos are the sexy tacos. They’re aesthetically pleasing. But they also have elements requiring a long cooking process. There’s nothing on the menu that’s quick to make.”

As one might guess from the winning Korean taco, the restaurant’s menu selections are not confined to traditional taco ingredients. The street (calle) taco menu is filled with the unexpected, carefully developed flavors, and influenced from his time in Hawaii. There’s a blue crab taco, and a sushi-grade ahi poke taco served in a taro root shell, and pork belly with kimchi. For traditionalists, there are lengua, fish, and 36-hour beef short rib tacos, a family recipe for mole (but served with duck), along with a taco of the week and an Argentinian-inspired Cedar River New York steak taco with chimichurri. Antojitos (including proper, creamy Texas queso), ceviche and salads round out the menu.

“I wanted to achieve the right texture and flavor and balance it with originality,” says Hinojosa. “It’s meant to be harmonious, so when you have a bite of the food, you’re going to get it the way I designed it — to have the maximum amount of flavors and to hit as much of your palate as possible, so all of your senses are being activated. We try to bring that to every element at the restaurant.”

The restaurant’s interior has a casual but classy vibe with a mix of textures: brick and a three-dimensional wood wall, corrugated metal fixtures accented with street art, high tables and cozy, high-backed banquette booths. The bar is rimmed with cushioned leather, and deep green wine bottles give a stained-glass effect behind the bar. Morris was meticulous in choosing the perfect lighting and acoustics.

Hinojosa flew in a top mixologist from Hawaii for the job of expertly crafting the inventive cocktail menu. The drinks are well-rounded with shrubs, St. George green chili vodka, pisco, mezcal and small batch vodkas, all top-of-the-line. Most elements are made fresh in the kitchen by Hinojosa and his talented culinary team. True to the owners’ backgrounds, is a significant selection of wines, bourbon, whiskey and beer on tap, in bottles and a few in cans. Happy hour specials offered six nights a week, from 3 to 6 p.m., are a big draw as well.

“It’s a neighborhood restaurant,” says Hinojosa. “We want people to feel comfortable coming in here, and I don’t want it to be the same experience twice. The same thing comes through with the food. It’s super thoughtful. Chef-driven restaurants are experiencing a revival in Phoenix, and we’re excited to be a part of it.”