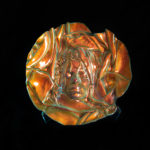 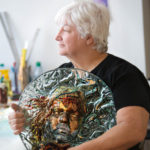 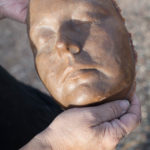 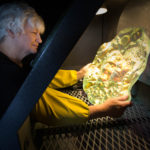 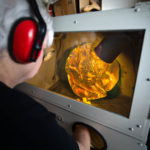 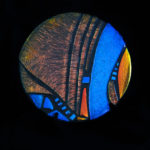 At one point during our interview, Peggy Pettigrew Stewart pinches herself as she recounts her journey as an artist. She still cannot believe it.

Because living a life as a professional glass artist wasn’t always a part of her plan. In fact, prior to a full-time career in art, Valley resident Peggy owned a successful car rental company — an accomplishment that gave her joy and purpose. It wasn’t until she received a cancer diagnosis in 1998 that she was suddenly placed on a new path in life.

Thankfully, after a difficult year of chemo and radiation, Peggy beat cancer. But she was now a new person whose recovering body could no longer keep up with the demands belonging to an active, self-employed businesswoman.

“When I was recuperating from cancer, I couldn’t do anything and I was so bored,” Peggy says. “I started stringing beads.” Then, after receiving advice from her husband’s co-worker, she was inspired to make her own glass beads and signed up for classes.

However, bead making wasn’t her cup of tea. She hated the open flame of the torch (thanks in part to growing up with a fire chief dad) and almost didn’t go back to the workshops to learn the basics of glass fusion.

But she did. And that choice would ultimately transform the rest of her life.

“I came back in and fell madly in love with fusing — it was an instant drug addiction,” describes Peggy.

Now, her glass art belongs in museums, public and private collections and even the White House. At 50 years old, she was accepted into Dale Chihuly’s Pilchuck Glass School and then trained at the Academy Taller in Barcelona, Spain. Her success came after many years of dedication to learning new techniques and methods, including an unusual process Peggy mastered called verre églomisé, which dates back 400 years. This process requires Peggy to skillfully work glass intaglio (in reverse), a beautiful process involving sandblasting, painting and inlaying copper, silver and gold to the backside of most types of fused, cast or flat glass.

However, Peggy didn’t want to just learn; she wanted to develop new techniques using specific materials. Namely, to create hot furnace glass without the use of a furnace, an expensive piece of equipment Peggy didn’t own or desire to purchase. And when she looked for answers among established artists, she was repeatedly told it couldn’t be done.

“The glass artists had said that the type of glass, materials used and the extreme movement I was requiring of the glass was not possible,” explains Peggy. “That the glass would break or something horrible would happen to my kiln. I got frustrated, angry and said that I would find a way to do it.”

She then committed herself to achieving the impossible: “I studied the materials, science and chemistry of glass. I set about working with the masters in glass.”

And achieve the impossible, she did. After much trial and error, she developed a method that would allow a very large and rarely used piece of flat glass (coated with a thin film of dielectric coating) to melt into and drape over a mold — all miraculously done without the open flame of a furnace and the need to pour molten glass using a ladle. Through this kiln cast process, Peggy manipulates the glass in order to create texture, pattern and other intricate details.

After casting molds of faces this way, Peggy created exquisite and one-of-a-kind glass art. Because of this, she began to cast the faces of many celebrities, including Michael Jackson (completed using his “Thriller” special effects mold), Jack Nicholson, Kevin Sorbo, Olympic gymnast Olga Korbut, Vincent Price, Catherine Hickland and many more.

While this further established her as a skillful glass artist, it also created an opportunity for Peggy to take her art down a more personal path.

Growing up in the San Francisco Bay area, Peggy lived and loved the 1960s psychedelic rock bands that originated in that region and inspired music around the world. For Peggy, it was more than entertainment; it had become her motivation, counselor, friend and teacher.

So it was only a matter of time before Peggy’s love of music and art collided.

After encouragement from a fellow artist to create art that was meaningful to her, she began to envision a project that would pay respect to the individual musicians, not just the bands, that had impacted her life. Members of bands like Jefferson Airplane, Big Brother and the Holding Company, The Youngbloods, Country Joe and the Fish, Steve Miller Band and Grateful Dead, just to name a few.

“Next thing I know, I get contacted by two people telling me how much they loved the piece of Catherine [Hickland]. The first was a person who had the name of Michael and the last name of Joplin,” says Peggy, who then pauses and smiles. “Janis’ brother. He’s a glass artist in Tucson. He showed [my work] to a guy named Sam Andrew. He called me and his name was familiar. I went and looked at some albums and I said, ‘Could it be? Could it really be?’ And it was.”

Sam Andrew, the founding member and guitarist of Big Brother and the Holding Company, came down to Peggy’s studio two days later and allowed her to cast his face — the first of many living legends of rock that Peggy would ultimately cast for her project. A project that only Peggy can describe.

“Each piece is a storyteller, as the sculpture contains unique icons and subtle stories about the artist,” Peggy explains. “Like a record, the glass is round. And as in a song, each sculpture has a melody, harmony and rhythm. Their face represents the melody and is centered in the sculpture. The melody in a song is always surrounded by harmony and rhythm. The harmony is the area surrounding the face. It tells the story. Subtle imagery of things important to the musician is woven into the glass. Last is the rhythm. The texture and movement of the glass represents the rhythm. Thus, each glass sculpture is like a song, their personal song.”

These storyteller pieces will be showcased in a museum and gallery exhibition during next year’s 50th Anniversary of the “Summer of Love.” Peggy’s vision includes a time tunnel that follows the musician’s journey, beginning with their musical career and ending with their current life in and out of music. The exhibition will also include a montage of photos carved into glass, their non-musical passions, personal memorabilia and intaglio glass carvings of the original concert posters.

“It is a fascinating project,” says Peggy. “Working with these incredible music legends is a dream come true. Using my glass art to tell their unique story is a major highlight of my life. It is a legacy I wish to leave. Anyone can write a story about them, but I am using the unique medium of glass to tell this story. Telling a story that you can’t find in any book.”

And she isn’t just telling their story through glass. She’s telling her own story, one of determination, strength and resilience.

Because Peggy has overcome more than cancer and naysayers. Last year, the doctors said her right temporal lobe would need to be removed as a result of her mesial temporal sclerosis. This would remove the parts of the brain responsible for enjoying music, creativity and emotions — all aspects of Peggy’s life that were non-negotiable. So, she chose to take the road less traveled (like many times before), and underwent a new ablative brain surgery last year.

Now, with a successful surgery behind her, Peggy can continue achieving the impossible, in both life and art.