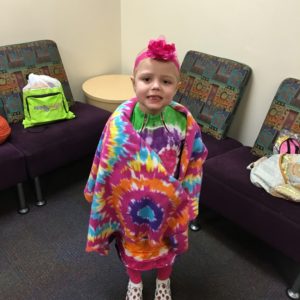 “Zoe loves her ComfyCozy shirts and wanted to wear them to school for show and tell. She tells everyone who asks about Amanda and even has her picture on the fridge. We see AHRA volunteers everywhere … painting children’s nails in the clinic, feeding families every week, bringing gifts to inpatient children — and that’s just at our hospital! They travel the Valley and beyond, helping families at other children’s hospitals, too.” -Vanessa and Pete Mellas 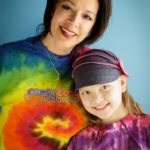 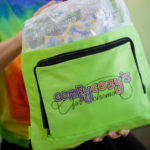 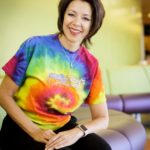 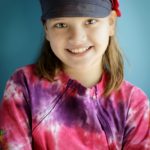 “Zoe loves her ComfyCozy shirts and wanted to wear them to school for show and tell. She tells everyone who asks about Amanda and even has her picture on the fridge. We see AHRA volunteers everywhere … painting children’s nails in the clinic, feeding families every week, bringing gifts to inpatient children — and that’s just at our hospital! They travel the Valley and beyond, helping families at other children’s hospitals, too.” -Vanessa and Pete Mellas

When Lorraine Tallman lost her young daughter, Amanda, to cancer in 2012, she took inspiration from her child, and turned a devastating experience into a mission to help other children and families facing life-threatening illness.

Lorraine founded the Amanda Hope Rainbow Angels (AHRA) Foundation and began making the organization’s signature ComfyCozy’s for Chemo — brightly colored T-shirts with zippers, pockets and slits that grant caregivers, nurses and doctors easy access to a child’s ports and tubes, preserving the privacy and dignity of the patient. The shirts themselves were Amanda’s concept, as she hated having to disrobe in front of strangers and wanted to create adaptive tops for other children. Amanda was endlessly giving and had a huge heart for everyone. That spirit continues in AHRA.

“I think God gave Amanda to me to teach me how to be a human being,” says Lorraine. “She taught me so many lessons. We have helped more than 5,000 children in just three years. Even though it’s very difficult, it’s so rewarding. I feel like one of the most blessed people in the world.”

Lorraine is preparing for AHRA’s Night of Hope Gala on October 1 to raise funds to help families facing childhood cancer. Attendees are encouraged to wear white to honor the innocence of children fighting cancer and other serious illnesses.

In contrast to charity auctions that offer products and services that benefit the bidders, the Night of Hope auction items are those that will benefit families. From grocery and gas gift cards, to camp sponsorships and financing a special luncheon that allows families to network with each other, to even finding homes for pets or maid services to have homes sterilized for patients returning home from treatment. Every bid at Night of Hope provides real, tangible help. And helping others, in the spirit of Amanda, is Lorraine’s life mission.

Most of her days — and they are long, 12 to 14 hour days — are spent with mothers, fathers, siblings and children living the same nightmare that the Tallman family lived for four long years.

“I tell them, ‘The pain is real, but you’re going to get through it,’” says Lorraine.

Amanda’s pain began with terrible migraines at the age of 9. While doctors believed the little girl was simply anemic, Lorraine knew that something was very wrong. Upon her insistence, blood work revealed that Amanda’s blood hemoglobin levels were so low that it was a miracle she was standing upright at all. They were sent home while the blood work was analyzed, but soon received a call with devastating news: Amanda had leukemia, and would need to be admitted to Phoenix Children’s Hospital immediately.

Further tests would soon reveal that it was a very advanced form of acute lymphoblastic leukemia (ALL) that would require three years of intense chemotherapy, most of which was in-patient.

The first weeks were a whirlwind of activity, with everyone running on adrenaline, but soon came the reality that this was the Tallman family’s new normal. Juggling Amanda’s hospitalizations and her older daughters’ school and outside activities, it became impossible for Lorraine to continue working, leaving the family down to just one income. Soon, the bills came rolling in with a vengeance. Only 4 percent of National Cancer Institute funds are dedicated to childhood cancer, so almost all funding is private. That means chemo drugs for adults are used in clinical trials and are seen by insurance companies as experimental. Therefore, it is a battle to get the costs covered, as there are “allowables” and “non-allowables.” The fight against childhood cancer isn’t just physical. It’s also financial.

“For so many families, financial ruin is just around the corner,” says Lorraine. “The nurses would joke with me, saying, ‘You’re buying a Mercedes today!’ because the blood plasma costs $60,000. Monthly pharmacy costs for some of our families can reach $3,600 per month. You’re paying huge bills and you’ve lost your income. There’s nothing worse than the feeling that you can’t take care of your own child.”

Today, gift cards for groceries, gasoline and hospital cafeterias, or funds to help cover rent and electric bills are among the many supports AHRA offers to families. Lorraine is in constant fundraising mode to help alleviate the monetary burdens of having a sick child and provide families with counseling and emotional support, in addition to in-hospital programs to cheer up and connect sick children, particularly teens, who are often not included in other charitable efforts.

Those precious, life-saving treatments also meant intense physical pain for Amanda. Pain medication is severely limited for children because of the permanent kidney and liver damage it can do, and watching a child suffer causes extreme emotional anguish for parents.

“You’re holding your screaming child for five to six hours and the doctors say there’s nothing more they can do,” says Lorraine. “The children have so much fear because they know what certain types of chemo can do to them — those that will hurt them and make them violently ill. It’s physical and psychological.”

Lorraine recalls having many “Mama Bear” conversations with the doctors. She wanted relief for Amanda and was trying to navigate a system that didn’t make sense to her, one where the rules of the business world she was accustomed to just didn’t apply.

“Going through those three years put a burden on my heart for other parents who are fearful and don’t know how to have a voice,” says Lorraine. “They’re worried that speaking up will hinder their child’s care.”

Lorraine now serves on the Phoenix Children’s Hospital Family Advisory Council, as well as on the Palliative Care and Grievance Committees, sharing the patients’ perspective with new hires and existing staff. She explains what parents are going through and the unique nature of childhood cancers and other illnesses, reminding them that every day in the children’s ward is someone else’s worst day.

“I’m so proud of PCH for having this program,” says Lorraine. “Every new employee gets to hear what it’s like to be on the other side. I tell them that the detachment they’re trained to have in med school can’t exist when dealing with parents and children. Medical staff need to respect the family’s fear, anxiety and hope. I say, ‘You don’t have the right to tell someone there’s no hope. Those words are not allowed. The hard fact is that children die in this hospital all the time. You could be the very last smile a child sees in their lives. You don’t have the privilege of bringing your personal difficulties to work with you.’”

In March 2011, after 30 months of treatments, Amanda was declared cancer-free. The family was elated as Amanda returned to her daily life — school, friends, karate, skateboarding and her new English bulldog puppy, “Bruiser,” a gift to celebrate the end of her treatments. Lorraine started back to work, anticipating paying down the massive debts the family had incurred. But their joy was short-lived. In June, the intense headaches returned. Though the doctor said she was fine and sent her home, within minutes, things went terribly wrong. The left side of Amanda’s face became paralyzed, like she had suffered a stroke.

Scans soon revealed that Amanda had a brain tumor and would require surgery.

Back in the hospital, Amanda was a veteran by now, and wise beyond her years. She was always concerned for other kids in the hospital. Amanda insisted on checking in on the other children, even on the day of her brain tumor biopsy.

“Amanda had a huge heart for everyone,” says Lorraine. “She would even save lunches from the hospital so she could give them to a homeless lady we always saw on our way home.”
The family rejoiced when Amanda’s older sister was named a bone marrow match — a rare occurrence. Chemotherapy was supposed to limit the cancer’s spread before the transplant surgery, but had the opposite effect. Doctors discovered Amanda had gone from 5 to 85 percent cancer. It was the worst day of Lorraine’s life as she was told her daughter had two weeks to live. Amanda was 12 years old.

Typical of the strong fighter Amanda was, she lived three more months. Friends raised enough money to fulfill Amanda’s last wish — a trip to Italy with Lorraine and a couple of her best friends, seeing a baby panda at the San Diego Zoo and getting to pet dolphins. Lorraine felt blessed that they were able to complete Amanda’s bucket list, and the experiences seemed to fuel Amanda to hang on to life a bit longer.

Still, she dreamt of helping others, quite literally. She had dreams about the adaptive T-shirts that would become ComfyCozys for Chemo (now provided, free of charge, to every Arizona child with a central line). Amanda spent her last eight days at Ryan House, a children’s hospice center, in a room painted like a galaxy.

“She said it was the happiest room she’d ever been in,” says Lorraine. “She was surrounded every day by teachers, friends and family. We read her favorite books, played games and had a cookout. No one was allowed to cry. I was strict on that, because I knew Amanda would take it on and feel responsible. She sat me down and used my own words, saying, ‘Are you listening with both ears? Look at me … Mommy, there are so many kids who don’t have you for a mommy and they need you. Promise me you’re going to do this, that every kid gets a ComfyCozy.’ So, here I am.”

Amanda Tallman passed away on March 30, 2012, just two weeks before her 13th birthday.

Lorraine credits the many positive people around her for keeping AHRA going, day after day, for the past three years and into the future.

“When someone tells me I can’t do something and I know it’s something that Amanda wanted, a fire is lit within me to prove them wrong,” says Lorraine. “When it comes to helping children, no is not an answer.”