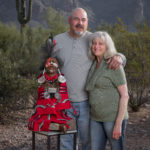 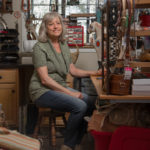 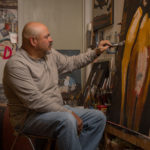 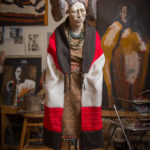 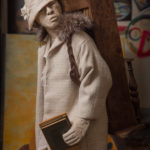 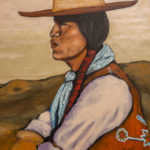 From island to ranch to desert, Studio Paleo’s Dave and Sandy Daniel have lived, constructed, and created in diverse environments over the course of their nearly 40 years of marriage. Now based in Apache Junction, their collaboration of vision, artisanship and adventurous spirit comes through in the contemporary folk art they produce, and art collectors here in Arizona and around the world are taking notice.

It all began with the Peace Pony, which has become a signature creation of Studio Paleo. In 2012, Dave carved the first ponies from wooden beams reclaimed from an old cotton warehouse in Eloy, Arizona, and consigned them to Big Bronco, a Western furniture store in Cave Creek. The horses are completely one-of-a-kind pieces carved by Dave and painted by Sandy, who dresses them with fabrics, feathers, beads, found scraps of leather and metal embellishments. Patrons were immediately drawn to them, and the ponies have gone to live in homes in Arizona, around the country … even as far away as Sweden.

“I say it’s like Pinocchio,” says Sandy. “He brings me this little bare, freshly-carved pony and as I start painting and laying on the fabric, each one gets its own personality and people just fall in love with them. They make people smile.”

This personal connection is such that owners of Peace Ponies have been known to give them names and send the Daniels updates and photos from their new homes.

Dave and Sandy have been a successful creative team from the start. Sandy, a San Diego girl, met Dave in Waikiki. It was love at first sight, and the two were married within six months of meeting.

“He was an adventurer from the very beginning,” says Sandy. “We moved away from busy Oahu to Hawaii with $500 we’d saved up and an old Impala his stepdad had given us. We didn’t even stop to think about it. We just did it.”

When you get something in front of you, you look at it and look at it until you can see what it will become.

The two began building homes together from the ground up, utilizing materials from old buildings and Dave’s construction and self-taught design talent. They lived on the land and in the unfinished homes as they built them. Sandy jokes that they were “glamping” before anyone had coined the phrase.

“That was our outlet for creativity,” says Dave. “Sandy was right there with me — we built the houses together. When I designed homes, I’d think aesthetically, working from the outside in. It was the opposite of how you’re supposed to go about it, but I learned as I went.”

They completed and sold 11 homes on the Big Island, drawing upon their artistic visions and a whole lot of sweat equity. The pair’s adventurous spirit and hard work ethic have served them well ever since.

Dave’s job at a major airline, which he still maintains, allowed the pair to travel extensively with their two children throughout Asia and Europe. The color, vibrancy and indigenous influences of world cultures appear in the work they produce today. Their children’s schooling eventually brought them to the mainland, where they’ve spent time in both Arizona and Texas. Soon, they will come full circle, as they’ve recently purchased a plot in Volcano, Hawaii in the midst of an enchanted forest at an elevation of 3,000 feet, where they will build a summer home, bringing them back to where it all started so many years ago.

In 2009, they purchased a 10-acre ranch north of Austin, Texas and set about restoring the original 1880s homestead while learning the ways of ranch life. They soon discovered that beneath the dirt was a treasure trove of artifacts, remnants of a previous property owner’s collection, and the area eventually became a registered historical site. Feeling the connection with both the indigenous people and pioneers who had once lived on that ground, Dave began painting. His own heritage as a native Hawaiian and his love of history contributed to his interpretation of this paleo period of time that largely remains a mystery and leaves room for creativity. He avoids copying the images of Native Americans made famous by photographer Edward S. Curtis, preferring to paint from what he envisions in his own mind.

His hauntingly beautiful sculpture, “The Pioneer Spirit,” is the form of a woman in an iron hoop skirt, holding an 1885 Bible with a feather in it. Sandy fashioned her sunbonnet from an old screen door and at her back are wings made from ribs of saguaro. Another piece, the masked and mysterious “Bird Man,” is also adorned with saguaro wings. Around his neck is a necklace of snake vertebrae. His lower body is made from cholla, and feathers ring his ankles.

Like his sculptures, Dave’s paintings, including the solemn “Medicine Man,” allow the beholder to consider the stories behind the faces. There is a subtle commentary about the suffering and survivors’ spirit of Native Americans that often runs through these pieces. He doesn’t pre-sketch, but begins painting straightaway when inspiration strikes. He sets the hue of the canvas first, and then works from there.

“I don’t giclée any of my paintings or make prints,” says Dave. “I think that’s what keeps people coming back. We don’t try to manufacture anything. We’ve sold out every year for the last four years. It can be hard to keep up, but whenever I have time off from work, I spend it carving and painting.”

Cholla, which is difficult to procure, is a favorite material of Dave’s and has an organic, almost prehistoric feel to it. Some of the pieces are quite large and the reclamation process takes months. The wood is carefully bleached and treated to ensure no insects remain, then Dave takes time to consider the curves and planes of each piece as its intended purpose slowly takes shape in his mind. He then adds busts carved from other wood to top the cholla, often working through the night when inspiration strikes.

“When you get something in front of you,” says Dave, “you look at it and look at it until you can see what it will become. It’s like when you read a book and really get a full concentration of your focus. It’s the same feeling. At night, it’s so quiet that you can go into yourself and think and create.”

Most of the Studio Paleo sculptures are Western or Native American in theme, but recently, Dave and Sandy have collaborated to create figurative art in a new vein and have been pleased with the response. Two in particular have caught the eye of Mesa Contemporary Arts Museum. Last year, “Southern Girl” was chosen by the museum for its 37th annual Contemporary Crafts exhibition in 2016, and “The Traveling Librarian” has been selected for its 38th annual Contemporary Crafts exhibit, to be held February 10 through April 23, 2017.

The librarian was inspired by a photo Sandy saw depicting women in 1920s New York City carrying small cabinets filled with books on their backs. The sculptural representation features clothing, shoes and books from the era. She captures the imagination and is opening doors to a widening clientele for Studio Paleo. The Daniels are enjoying the barrier-free art scene here in Phoenix, and it’s rewarding to see the appeal of their work for people of all ages and backgrounds.

“Arizona is open to everybody,” says Dave. “If you have the talent, people appreciate your work. I thrive on the energy I get from making something new and fresh. I look at the work of other artists and appreciate it, but it’s a glance. I want to keep my own style and don’t want to copy anyone else. Sandy and I just like to create from what inspires us.”