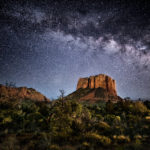 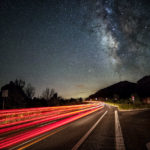 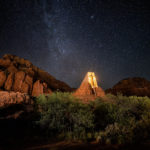 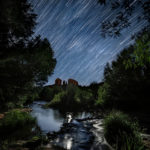 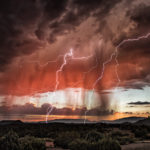 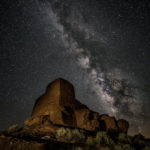 After dark, shadows of mountains majesty frame beautiful spacious skies illuminated by dazzling distant stars and galaxies. In Sedona and much of northern Arizona, russet cliffs stand proudly beneath bespangled heavens. The stars spin a dizzying maze through the treetops of our ponderosa pine forests. Here in the Valley of the Sun, the moon often takes center stage in a sky that seems to expand into infinity.

Sedona photographer Scott Stulberg has brilliantly turned stargazing into an art. He has managed to capture some of the most enchanting secrets of the night. We hope you enjoy his work as much as we do!

Find Scott’s breathtaking book, “Passage to Burma,” on his website.

A Most Memorable Moment

“Years ago, I took a trip up to the Grand Canyon around sunset with my wife and one of my students. After the sun went down, they both wanted to leave and come back to Sedona but it was during August, and I was just hoping and praying that we might see some lighting bolts.

“I decided to wait in the dark and keep my fingers crossed and my prayers were answered within about an hour. The first bolt hit right in front of my eyes directly over the Grand Canyon, and I yelled to them, ‘Let’s go! Get our cameras and tripods! This is it!’

“I will never forget that moment for the rest of my life. For the next two hours, all I could do was scream while I was shooting some of the most spectacular lightning of my life. It was absolutely one of the most remarkable times I’ve ever had as a photographer.

“My favorite image from that night ended up in the front pages of National Geographic, in the Visions of Earth section, as a double-page spread. Turned out to be one of those times where your intuition as a photographer really paid off.” ~Scott Stulberg

Scott Stulberg was born and raised in Los Angeles beneath the lights of Hollywood. His father, Gordon Stulberg, who was president of 20th Century Fox during Scott’s high school years, gave him his first camera—a plastic one that took roll film—when he was 10 years old.

“That was the beginning of an amazing odyssey and I completely fell in love with capturing everything I could,” says Scott.

“When I turned 13 years old, my parents built an amazing darkroom for me in the basement, and that was absolutely life-changing for me. I spent night after night under the safe lights and really understanding what photography was about. I really feel it was that darkroom that completely made me fall in love with photography.”

Today, he not only captures incredible moments and sights; he teaches workshops worldwide to help others find and express the beauty in the light, and in the dark.

About Photographing the Night Sky

Scott Stulberg has become an expert at catching the stars, the moon, lightning and other wonders in digital images, and it’s not a simple feat. Anyone who has attempted to capture night sky beauty knows that it is incredibly difficult to translate the remarkable sights into a two-dimensional photo. Those who are able to do it well are rewarded.

“There is something definitely unique and eye-catching about a good image that was shot after dark. Whether it includes the Milky Way, star trails or car trails, incredible architecture from a beautiful European city or so many other things, somehow the viewer gets drawn into your images and realizes this is totally different from daytime photography,” Stulberg explains.

Adds Scott, “I guess the most difficult part of photographing after dark is that you’re dealing with no light, and you have to understand your camera gear inside out. You do have a headlamp on for some of the time, but you can’t have that on too much because you’ll ruin your shots and everyone else’s shots around you.

“You also have to be pretty well-versed in what settings you need to capture longer exposures, or even if you want to do multiple exposures to do things like stacking images, exposure blending or shooting for even an hour or so to capture star trails. Even though all of this can be difficult at the beginning, after a while it becomes just second nature. Sometimes—actually a lot of the time—it’s a lot more fun and even a lot more rewarding.”

“Do your best to never stop learning. Reading everything you can, taking classes, searching on Google, and just being tenacious about studying photographs and techniques from other photographers.

“Try to decipher not only how somebody shot something, but what was in their mind at the time. … So many photographers shoot the same exact way, every time they shoot. They don’t think about different perspectives, trying to capture the scene a different way and hardly ever think outside the box.

“What gets you noticed is what made Steve Jobs an absolute genius. His motto was ‘Think Different.’ I have always had that in my mind when I pushed myself more with photography throughout the years. You have to push yourself all the time or you will never get where you want to be.”