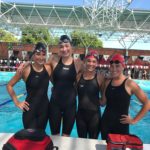 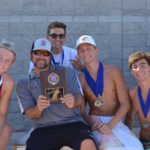 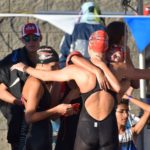 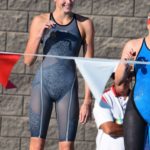 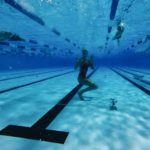 Processed with VSCO with a6 preset 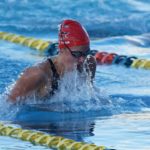 At BC, breaking a school record and getting your name on the gymnasium wall is the “I made it!” moment — a nice, positive spin on hitting the wall. All of the early morning workouts, going to bed early when non-swimming friends are out having fun, healthy eating and powering through the year-round grind instantly gets the “worth it” stamp. Even those who aren’t fast enough to set records themselves take pride in their teammates making the wall, knowing they were there to push them in practices and cheer them on in meets.

The BC staff who take off previous records and put up new names will be busy again this year, as they have been in most recent years. Every season, Scott Newell seems to find a new, record-smashing jewel for the BC swim team. Last year, it was Claire Grover, who in her first season at BC calmly went out and broke state records and won a state title — in her sophomore year. What would she do for an encore? Read on.
This year’s newbie star is Ray Van Deusen, who like Grover is a freestyle sprinter. At the kind of multi-team swim meet that is just short of chaos, Van Deusen was about to wolf down a sandwich, famished after powering to a first-place finish and trying to prepare for another event. But he wrapped up the sandwich and politely answered a few questions, like the big difference in swimming on a high school team.

Van Deusen is homeschooled, and all he knew about swimming was being part of a club team: the powerhouse, all-business Scottsdale Aquatic Club.

The school team, he says, “is a completely different experience than club. Everyone cheers you on — it’s really fun.”

At practices, Grover does push herself to try to keep up with Van Deusen, who she says is one of her best friends.

BC is suddenly on the map for college recruiters. After competing in the Pacific-12 championships in her freshman year, former BC star Krista Kolkebeck is in her second swimming season at Arizona State University. Big sister Holly Kolkebeck is a senior swimmer for Grand Canyon University.

As a high school junior, Grover has plenty of time to decide if she wants to study and swim near (ASU), far (University of California, Berkeley) or really far (East Coast). Next year, Van Deusen will be swimming for North Carolina State University. It’s a long way from Anthem, but he says he is excited to be part of the fast-rising NC State program.

Fellow senior Dakota Rubie is also planning to swim in college, while he pursues a medical career. You would think that after years of intense swimming he might be ready to move on, but not this guy, who never tires of hitting the pool.

“I’m in the water year-round,” he says with a smile. Where others feel the burnout after months of tough practices, “I haven’t had any deep ruts,” Rubie says.

These kids are in the pool at 5:30 a.m. every school day, then have two-hour practices after school. Yet the best actually enjoy the daily grind.

“I love swimming,” says Grover. “The harder you work, the better you get.”

As his senior season was fast coming to a close, Cooper Salmen — not salmon, though he swims like one — was thinking beyond the state tournament and even college swimming. He was thinking of immortality: “I want to be on the wall.”

At a late-season meet at McClintock High School, Van Deusen said he was getting excited to compete in his first state tournament. Coach Newell was also pretty pumped up as the state meet approached.

“The senior class is ready to shine,” he said. “We are seeded second in all relays going into state, and will have our largest boys’ state team ever.”

So how did they do?

Pretty spectacular, actually. Under Newell’s leadership, BC has become one of the top high school swim programs in Arizona, nipping at the heels of powerhouses like Brophy College Preparatory, Desert Vista High School and Pinnacle High School. This year, the girls cracked the top 10, finishing ninth in the state. The boys did even better, finishing third.

Van Deusen finished second in the 50 free, just behind superstar Jack Blake. Van Deusen’s final time of 20.86 seconds was an All-American time (a list based on the top 100 times in the country each year). Rubie also had a close second and All-American time in the 200 intermediate.

Individually, Rubie had a fifth place finish in the 100 breaststroke final and Salmen a seventh in the 100 backstroke.

The BC girls’ 200-free relay team of Rubie, Newell, Kolkebeck and Grover finished third, with Grover passing by five swimmers in her anchor leg.

Grover finished first in the 50 free and 100 breaststroke. In the former, her time of 22.92 seconds was a state record; in the latter, she finished nearly three seconds ahead of her closest competitor.

After her dominant performance, rising superstar Grover was voted Swimmer of the Year. Newell was named Coach of the Year for Division I.

“It was a good weekend,” he says, in quite an understatement.

And now, BC staff can get ready for some work. The relay teams that medaled, Rubie, Van Deusen and Grover all hit the wall with school records.