The Art of Presentation: Gerry Quotskuyva 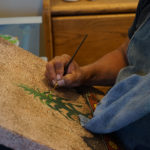 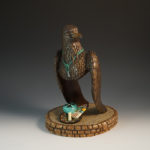 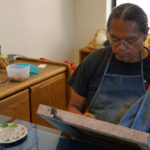 It’s the dawning of the Age of Aquarius. Every one of us is in the midst of a global conversation on a scale never before experienced in history. For the first time, thanks in large part to technology, we are seeing and hearing voices and perspectives of people outside our own echo chambers of experiences and ideas, and it is changing our political and cultural landscapes.

Whether we are living in a village in rural Africa or sitting in a corner office on Wall Street, every one of us is feeling the influence of globalization. In many ways, it’s a boon of opportunity, but on the flip side is a quest to maintain cultural identity.

In life and in art, Gerry Quotskuyva is approaching that paradox with one foot stepping toward the future, and the other firmly planted in tradition. A member of the Bear Strap Clan from the Second Mesa Village of Shungopavi on the Hopi Reservation, his quiet demeanor and calm presence belie the importance of his accomplishments.

By trade, Quotskuyva is an acclaimed artist, but what he really does is plant seeds.

Quotskuyva follows the agricultural path of his ancestors, coaxing beans, squash, gourds or corn out of the same soil as generations before ran their own fingers through at Verde Valley Ancestral Garden. He also nurtures kernels of peace through art.

His katsinam (Anglicized as “kachinas”—there is no “ch” sound in the Hopi language), bronze work, painting and glasswork channel the wisdom of the ages revealed to him through dreams and visions. More often than not, his creations blossom in unexpected ways. Hidden meanings emerge long after a piece is completed, and doors to understanding are unearthed and discovered.

“My work is really special when it comes to being Hopi,” he says from behind a tidy desk at Sedona’s Creative Gateways, his newest workspace. “A lot of times, I do not understand what I’m doing until it’s finished.”

To illustrate this crux, he points to a tower forged in bronze. On it is a small metal plaque with the title “Cultural Fortitude.”

“I had this idea of doing a kiva. That’s where we go to learn respect for our culture and ceremonial practices,” he begins, carefully measuring his words. “I carried the idea around for years. Then I had an odd exchange with a couple at the Washington Monument in Washington D.C.

“The shape of the Washington Monument is an obelisk, which can be found in petroglyphs and in other parts of the culture of Pueblo people. It occurred to me that, what was part of the past for us is now a permanent symbol of who we are in the United States.”

Quotskuyva planted that idea far away from his rational mind and let the creativity flow. What emerged was an obelisk with a round kiva top, much like Puebloan buildings in the pre-Spanish era. Corn, the foundation of Hopi agriculture and spirituality, grows up the front, and a prayer for peace is depicted in petroglyphic symbols.

The back conveys earthen bricks, a fortress of sorts, which, over time, Quotskuyva realized symbolized the tightly held secrets of the Hopi world.

“It’s interesting how it comes together for me,” he said, as if he were more of an observer of his process than an active participant.

In many respects, Quotskuyva is building bridges. He is part of a new generation of Hopis, and the journey he is on is largely unchartered.

For as long as anyone can remember, history, religion and many other aspects of Hopi culture were guarded from corruption by outside influences through secrecy; only a chosen few were trusted with many of the stories and ways that define what it means to be Hopi.

Today, though there are still ceremonies and beliefs that are kept hidden away from the Western world, a new school of thought is evolving. By sharing pieces of tradition, the world outside of the 2,500-square-mile Hopi Reservation can begin to gain an understanding—ergo an appreciation—for the importance of preserving a disappearing way of life.

Quotskuyva’s role seems to have chosen him for the job, rather than the other way around. At the age of 35, after working in food service for Hollywood and holding various jobs in radio, he had a dream that changed the course of his life.

In the dream, Corn Maiden, a spirit who symbolizes the gift of bountiful harvests, came to him. Katsinam flew from the corn, and husks turned into her robes. When he awoke, he knew he had to carve her image.

He showed that first carving, “Corn Maiden,” to his grandfather, who was himself a famed carver. His grandfather was impressed. From that moment forward, Quotskuyva knew he had found his path.

Along the way, he realized that he did not have to sacrifice authenticity to form a connection between his Hopi roots and the outside world. He still listens to the roots of the cottonwood tree to discover what they want to become, and he has remained true to the teachings he’s learned in his clan’s kivas.

At the same time, he has ventured out within the rules to express himself as an artist, infusing traditional images with contemporary styles.

For example, is forbidden to forge katsinam from bronze in the Hopi culture, so instead, Quotskuyva has created other bronze figures, such as a striking bust of an eagle, titled “Tutuvena.”

He’s also embracing his newest passion, glass, as a medium.

“They never said we couldn’t do katsinam in glass,” he said with a wry smile. “What better way to bring something to life than with light! Glass brings so much depth and color. It’s really something.”

No matter his medium, museums, galleries and dozens of collectors have gained a solid appreciation for his work, and for the cultural lessons it holds.

His next project is perhaps his opus. A raw chunk of cottonwood root stands four-feet tall and two-feet wide inside his Sedona office. Its arms are intertwined, beautifully fused together in an earthen harmony that is art in and of itself.

This root, which has been carefully cured for about 14 years, has big plans in store for Quotskuyva. Eventually, it will become an epic nod to the matriarchal culture in which he grew up, with several individual katsinam and faces carved into the wood.

The work begins this month in Santa Fe, where Quotskuyva has secured a Rollin and Mary Ella King Native Artist Fellowship hosted by the School for Advanced Research. There are also plans to document his work on video.

Like the rest of the lessons he learns and imparts, this, too, will become part of preserving traditions so that they are not lost. After all, in a rapidly changing world, there is no better medium than art to ensure that the important things remain.