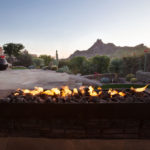 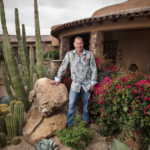 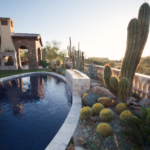 Every artist undergoes a conjuring of sorts: a nearly magical moment in which ideas are created from a palette of experiences, interpretation and inspiration. The artist chooses a medium then expresses that idea in a combination of color, texture and scale. For the lucky few, others connect through their creations, forming a bond through shared thoughts and emotions, and enjoyment of the work.

Chad Norris is such an artist. His medium is the desert itself.

The 2017 winner of Phoenix Home and Gardens’ prestigious Masters of the Southwest award is a landscape designer who, at 30, was the youngest recipient in the award’s history. To compare his work to much of the landscaping found in yards across the city is like comparing house painters to muralists; they may use many of the same tools, but the results are vastly different.

For starters, Norris, who is lead designer at Desert Foothills Landscape, never presents potential clients with drawings of his proposed work. Instead, he carefully assesses the living space and surroundings for style and function, and then develops a written narrative of his vision. He uses this vision to influence the plants he buys, the Landscaping Supplies Mandurah he needs, and the overall scale of the project. Sometimes he only needs to do a few small things for his clients to reach his vision whereas other times it requires a complete overhaul.

“I tell the story so they can start to get a mental image,” he explains. “I talk about what it does, why we’re doing what we’re doing, where it’s placed and how. Those are the bullet points to get them to understand and recognize what’s going to happen. Those elements are more important to understand than anything they can get from circles, dots and squares on paper.”

It’s an unconventional approach, but for those willing to trust in his creative process, Norris seldom, if ever, disappoints.

Another of Norris’s trademark talents is his ability to move between rustic and contemporary styles. Many Phoenix area homes tend to lean toward Santa Fe or territorial architecture. For these spaces, Norris focuses on natural and created mounds and contours for his designs. For contemporary homes, he creates a more linear feel with flattened earth and larger groupings.

Either way, the effects are stunning.

Within Norris’s designs are palettes of desert-loving succulents carefully cultivated in Desert Foothills Landscape’s private nursery. Few and far between are baby plants that have yet to grow into their glory. Norris and his crew scout the city for plants that are rare, mature and full of character, then use them in combinations that allow each plant to stand out.

The ground becomes a living canvas, often echoing shapes of surrounding mountains, making them appear as if they are extensions of the yard.

Inside the house, the style and artwork on the walls is reflected outdoors. Windows become picture frames depicting thoughtfully planned, ever-changing scenes of shapes and colors, each with a developing story of its own as winter turns to summer and the color palette changes.

Norris comes by his passion for molding the land and flora honestly. He scooped his first shovelful of dirt with his father, who still owns a landscaping company. Through the years, he practiced his trade doing everything from small residential projects to corporate landscaping. “It’s the only thing I’ve ever done,” he says with candor and confidence.

“We meshed really well,” Norris says. “He was able to teach me his philosophy, how he thought about things.” It was the seeds Wdowiak planted in Norris’s mind that eventually blossomed into his own style.

Upon Wdowiak’s retirement, his torch was passed to Desert Foothills Landscape’s new owner, Aaron Clark. Norris stayed on as lead designer and vice president of sales, and together their dreams have only broadened.

“We want to share our approach with more communities,” Norris explains. “As people are evolving and styles are changing, people are becoming more interested in high visual impact landscaping.”

Aside from his business acumen, his ability to use his creative process to help people love their homes and their outdoor spaces is his true passion.

“Being able to build something from scratch that changes something significant about a home changes the quality of people’s lives. They want to spend more time outdoors. They love coming home, driving up their driveway to this oasis we’ve created. It’s something special.”

In fact, it is something special. It’s just like nature-only better.