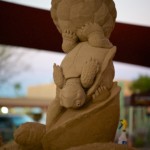 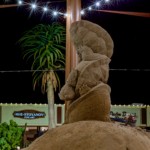 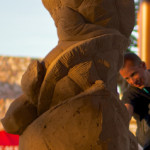 Throughout the year, the Town of Carefree diligently plans events that provide the public with unforgettable experiences. These one-of-a-kind events, tucked away in the beautiful Sonoran Desert Foothills, leave guests filled with delight and the desire to return for the next fun-filled affair.

This spring and summer, the town is proud to feature Carefree’s favorite sculptor, Ray Villafane.

For those unfamiliar with Villafane, last fall, the world-renowned pumpkin carver and sand sculptor transformed Carefree Desert Gardens into an autumn wonderland with quirky and imaginative pumpkin carvings. These pumpkins, which were unlike any other, earned him the title “The Michelangelo of Pumpkin Carving,” dubbed by Martha Stewart.

“We receive countless calls asking when Ray will be coming back for the season,” says Gina Kaegi, the director of marketing for the Town of Carefree. “He is a draw to the town and garners media attention like no other.”

In addition to his pumpkins, Villafane had people flocking to Carefree back in May 2016 to see his sand sculpting masterpiece. With the added sculpting skills of Sue Beatrice, their creation came to life and featured the beloved “Chessie Trunkston,” a life-size elephant playing chess with an adorable field mouse, “Hershel Higginbottom.” This wow-filled event allowed the public to watch them turn 24 tons of silt into a magnificent display of sand-sculpting excellence.

In March, Villafane and fellow sand sculptor, Nikolay Torkhov from Russia, worked together to build yet another incredible work of art at Carefree Gardens. The event also featured a special appearance by professional stone balancer, Tim Anderson. Together, they completed a 30-ton masterpiece that’s both playful and artistically fantastic.

Their work will be on display throughout the summer in the Sanderson Lincoln Pavilion at Carefree Desert Gardens. It’s free to see, and will no doubt delight, amaze and inspire those who see it to take sandcastle-building to new heights!

“Carefree’s mission is to create indelible memories for residents and new guests through unique experiences among a beautiful backdrop like the Carefree Desert Gardens,” says Kaegi.

With so much talent and such exciting events, it’s a mission they continually achieve.