Binkley’s Restaurant: A Meal Fit for a King 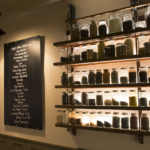 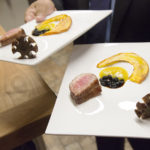 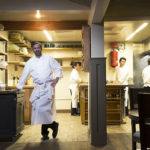 Kevin Binkley was born 300 years too late. One imagines him in the court of an 18th century monarch, overseeing grand dinners for dukes and duchesses, preparing roast pheasant and saddle of lamb, oblivious to financial constraints and the time-consuming bother of taxes, regulations, marketing and personnel management.

In reality, however, Binkley lives in 2017, meaning he must manage all those pesky business things while fighting to remain fixed on his life-long passion of cooking original, quality, memorable meals for people who love food as much as he does.

“I love to cook,” says Binkley, 44, summing up his life. And it shows. Many local gourmets would name him the Valley’s best chef, and everyone would place him in at least the top five.

“But I hate the restaurant business.”

That’s a surprising statement coming from one of the Valley’s best-known restaurateurs, a 2015 finalist for the James Beard Foundation Award who has been in the food business one way or another since he took his first job at age 14 at a TCBY. He makes it very clear that he means it:

“I’ve been cooking for more than 30 years. I don’t want to be doing anything else. I want to cook, not manage.”

Binkley has cooked more and managed less since last year, when he downsized and refocused, selling three of the four restaurants he and his wife, Amy, had run since 2004, and opening a new site under an audacious concept: an upscale, fixed-price, single-menu restaurant open only four nights a week, and limited to a maximum of 24 people per evening. The concept is not unknown elsewhere, but it’s a first for Arizona.

The singular focus on one menu and a relative handful of people is a far cry from the life Binkley lived prior to 2016.

“I was driving between the four restaurants all day long. We had restaurants all over the Valley. Some days I spent more time driving than cooking,” he said. Something had to give.

“I had conversations with my wife about how we needed to downsize and get down to focusing on one restaurant. It took two years to make it all come to fruition.”

In the long run, they kept the more casual-dining restaurant in Carefree, called Cafe Bink, but put it under the management of an associate.

At the new establishment, called simply Binkley’s Restaurant and nestled in a former family home on East Osborn Road, diners pay $165 per person to enjoy a three-and-a-half hour sitting in which they are served 20 or more small courses, from appetizers to dessert. A 22 percent service charge is automatically added. If the diner desires, wine pairings are available at $85 per person for standard pairings, $130 for the sommelier’s choices, or $190 for the chef’s selections. Additional items are available. Caviar is $72 per person, and if you demand Wagyu beef (a specially raised Japanese breed), it’s $42 extra per person.

It’s all about the customers having the best experience they can while dining. As the staff witness new faces daily, they are already thinking of implementing ways that can make the service and the management side of the business just that little bit easier. This is why a site like https://restaurantpossystems.com/talech-pos-review/ pointed them in the right direction. They noticed that many businesses are incorporating the idea of technology within their business, which seems like a step in the right direction for Binkley’s restaurant, but most importantly, help grow the business effectively.

And they are showing up, though not always in the numbers Binkley would like to see. The maximum seating of 24 is rarely achieved, and has been as low as 10. Eighteen diners is about average.

Curiously enough, Binkley would like to see the planned number of people he serves nightly drop to around 10—with, of course, a commensurate hike in prices. (“That’s the down side,” he admits.) His reasoning is simple: the fewer the diners, the more he can get to know their wants and likes, and the more he can concentrate on creating dishes just for them.

“I want to focus on one menu, know exactly who’s coming in, and prepare dinners from the absolute best products I can get that are in season.”

That being said, Chef Binkley will adjust the menu to accommodate food allergies and preferences. For example, he has served entirely vegan versions of his dinners.

How is it done? “We like to keep the alternative dishes similar, so everyone has the same experience at the same time, with similar dishes. For a vegan, I might substitute a pork tenderloin dish with something like a slow-smoked sweet potato.”

Binkley laid that down as a rule when he and this wife decided on the new concept: One shouldn’t go to a chef-driven restaurant and find the chef absent, anymore than one should go to dinner at friend’s home and find the friend absent.

“Home” is a key word here, as Binkley uses the rambling rooms of the old house to bring guests from the bar, to the dining room, to the patio, just as a guest for dinner might enjoy the various rooms of a host’s home. The core of the experience is, of course, what one patron calls Binkley’s “insanely delicious” dishes, which on a menu in September included the following from among its 20 offerings: candied salmon sliders; buffalo pakoras with bleu cheese dipping sauce; skewers of chilled, curry butter-dipped lobster with maple butternut squash and cold, seared foie gras; slow cooked duck leg, with beluga lentils; miso-glazed eggplant; rack of hazelnut-fed pork, with bacon-date relish in a balsamic-mirin glaze; braised abalone with daikon; selections of wild mushrooms, including chanterelles braised in goat butter; fresh huckleberries with cantaloupe coulis; and green tea pannacotta with a gingerbread crumble.

Everything is an integral part of the experience, down to the serving dishes. The tiny glass ones were made especially by Laughing Glass Studio to match the restaurant’s aesthetic.

Says Carole Perry, who owns Laughing Glass with husband Don Carroll, “As Binkley’s has evolved to create an experience of many diverse flavors and bites, we worked with Kevin to create smaller and smaller pieces that serve as an integrated canvas for the artful presentation of each dish. We’re currently making four new pieces for the new season.”

Count on everything to evolve at Binkley’s Restaurant, and on one thing to remain the same: Binkley’s commitment to the dining experience. He and his wife moved their home to within walking distance of the restaurant so that the chef would be able to check on dishes slow-smoking throughout the night. Amy Binkley planted and maintains a flourishing garden in the restaurant’s front yard area, so that many herbs are literally garden-fresh.

In all, Binkley’s Restaurant is devotion worthy of dukes, duchesses—and lovers of great, unique dining.