History in the Desert 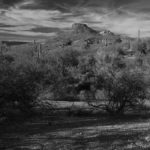 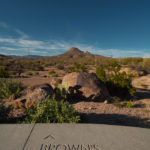 Hiking or biking the serene desert trails of Brown’s Ranch, it’s easy to get lost in the rugged natural beauty of saguaro-studded landscapes, bursts of spring wildflowers and precariously balanced boulders.

If you’re fortunate enough to spend time in this little corner of the Valley on a weekday, you can often traverse the entire three-mile out-and-back trail without seeing another person. Yet the human history of Brown’s Ranch is indelibly intertwined in its story.

Like so much of Valley land now covered in concrete and shopping centers, cattle and cowboys once roamed this land. The only difference is that, at Brown’s Ranch and the rest of the 30,500 acres of land in the safe keeping of Scottsdale’s McDowell Sonoran Preserve, history and the environment are being consciously and carefully safeguarded for future generations.

At Brown’s Ranch, Edwin Orpheus “E.O.” Brown and his wife, Mary Jane Coldwell Brown raised six children and thousands of heads of cattle in the dusty, rocky foothills in the early 1900s. During roundups, cowboys (some more scrupulous than others) came from all around to help.

Hiking the present-day trail toward the old ranch house location, one can almost smell the biscuits, beans and jerky gravy that “Chicken Henry,” the ranch’s renowned cook, fed them all each evening, and the peach cobbler he prepared for dessert.

Cowboys rounded up and branded the large herd, then led them south on Scottsdale Road—then, a narrow dirt pathway—toward the stockyards. It’s not difficult to imagine the thick cloud of dust as the herd, moaning its lows and bellows, paraded through the otherwise-solitary desert.

E.O. Brown’s son, E.E., or “Brownie” as he was known, was tall, sturdy and wore an intimidating Colt .45 that likely settled many an argument. It’s still rumored that John Wayne, who grew up far from ranch life in Southern California, copied many of Brownie’s traits to become the iconic on-screen American cowboy.

It was Brownie who built the two-room ranch to share with his wife Goldie, parts of which still remain today.

Like most ranchers, Brownie, who was deputized by the Maricopa County Sheriff, was a jack-of-all-trades. One of his most challenging jobs was protecting the pipelines, wells and windmills running across hundreds of acres of his land. Brownie and his men instilled their own Arizona justice on anyone messing with the water through “lead poisoning” via bullet. No questions were asked; as far as the law was concerned, justice had been served.

Brownie died in 1966, but his legacy (and that of so many early Arizonans) remains, thanks to the McDowell Sonoran Preserve.

An exhibit open through May at Brown’s Ranch Trailhead tells much of the story of Brown’s Ranch and other now-historical faces and places. Arizona Historical Society has played a major role in preserving the state’s history and telling its unique story at the beautifully designed trailhead entrance.

History in the Desert is the product of a year-long partnership between the Arizona Heritage Center and the 26-year-old McDowell Sonoran Conservancy, and includes photographs and relics from Arizona Historical Society collections showing ranching, mining, farming and other elements of our history.

McDowell Sonoran Conservancy Pathfinder volunteers are present to help with interpretive exhibits and guidance Monday through Friday, 7 to 9 a.m., and Saturdays and Sundays from 7 to 11 a.m.

The History in the Desert exhibit at the Brown’s Ranch Trailhead is an extension of a shared commitment to preservation, providing visitors of all ages an opportunity to learn about the important work being done by the Arizona Heritage Center, the Arizona Historical Society, and McDowell Sonoran Conservancy. It is part of a continuing effort to ensure that the echoes of our unique history can be heard for generations to come.

History in the Desert