arizona give back to children 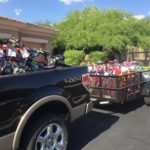 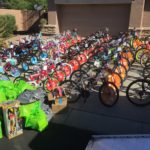 18,000 sick children are admitted to Phoenix Children’s Hospital each year, and thousands more are treated. Some stay a few hours; others are hospitalized for months at a time. Each represents a family in crisis, experiencing their worst days and trying to maintain hope for a positive outcome.

It is the mission of Anthem resident Brian Billideau, founder of Smiles 4 Sick Children, to bring a bit of happiness to each and every one of these children. It all began because of a tragedy in his own life.

“In June of 1992, a young girl ran out into traffic and straight in front of me,” says Billideau. “I hit her before I could hit the brakes. I’ve lived two lives: one ended and the second began the instant I hit her, and it’s been very hard to live that second life.

“I think of her every day, and a good day is when I don’t see the images, but that rarely happens. It’s been difficult to live with the guilt I feel every day, but by trying to dig myself out of a very deep, dark hole, I decided years ago to try to make kids happy any way I could. I believe that each time a child receives a toy and smiles, a little girl in heaven smiles as well. I just hope that someday I have the chance to tell her how sorry I am.”

For the first 20 years following the accident, Billideau shopped and donated all on his own, but in 2013, he began to ask those in his community to get involved. He has had an incredible response from schools, civic organizations and private citizens. He is uncomfortable talking about the circumstances that started it all, but believes God has a plan to use his story to benefit more children.

Since establishing Smiles 4 Sick Children, 6,000 toys and gifts have been donated—from Legos, Barbies and bicycles for the younger set to lotions, makeup and video games for teens. The hospital generally runs out of toys by mid-year, so in addition to the usual Christmas toy drive in December, this year a Labor Day toy drive was launched, gathering 51 bikes, 400 Lego sets and 150 other toys. Billideau is a familiar sight to workers at Toys R Us and Kohl’s, both of which offered him a special discount when they learned about his project.

“The hospital runs out of toys, but they never run out of kids,” says Billideau. “We may not be able to cure their diseases, but we can make their day brighter and help them forget, if just for a little while, why they are in the hospital in the first place and take a bit of pressure of the parents. I hope they’ll be inspired to give back someday when they are healthy again.”

Billideau has done all this while fighting his own battle with rheumatoid arthritis that has necessitated 22 surgeries, but counts himself blessed to be able to devote his life to Smiles 4 Sick Children.

Beyond toys, he has donated specialized red wagons fitted with IV pole brackets to PCH, Flagstaff Medical Center and Cardon Children’s Medical Center in Mesa. In addition to toys, his wife Karen has organized volunteers to donate more than 500 hand-knitted caps for premature newborns and children who lost hair due to chemotherapy, and helped establish a program with the Arizona State Prison system to provide yarn and materials to prisoners who meet weekly to knit the caps.

Looking ahead, his goal is to donate 20,000 gifts per year by 2020, establish a scholarship fund for PCH’s youngest patients, and he is training Sophie, his beloved chocolate labrador retriever, to be a therapy dog. Billideau speaks to groups about living a philanthropic life and warning about the dangers of distracted driving.

The December toy drive loading party is a big event at the Billideau home. Volunteers are treated to a cookout, and participants young and old form a line from the house to a huge truck, passing toys and gifts hand-to-hand. He hopes the children who attend will be inspired to live a life of service.

“When you give to a local charity like mine, you might be helping someone in your own neighborhood,” says Billideau. “Unlike some charities, 100 percent of what I take in goes to the kids. These children will never know you, but they’ll never forget their generosity.”