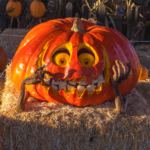 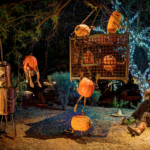 With cooler temperatures right around the corner, it’s time to start thinking about pumpkin spice foods, fall décor and Halloween. For those in Carefree and the surrounding communities, the anticipation is ramping up for one of the most engaging and exciting annual community events—the Fourth Annual Enchanted Pumpkin Garden.

Each year, people flock from around the Valley into Carefree to participate in the four-acre fall fest that showcases Halloween with food, fun and frighteningly fantastic carved pumpkin and gourd art courtesy of world-renowned artist, Ray Villafane, who also has an art studio in Carefree. The popular event takes place October 19-28 and incorporates the local community in just about every way.

“The beauty of it is that people come and they go, but they come back because the displays change since pumpkins only have a shelf life of a few days,” Crane says. “There is a constant flow of people and it is a always a festive atmosphere.”

He personally attends the event every evening and on weekends, meeting and greeting guests at the Town of Carefree’s booth that offers everything from information and Enchanted Pumpkin Garden merchandise to first-aid supplies, if anyone needs them.

This year’s event features something for every member of the community, including live pumpkin carving with Villafane, pumpkin arts and crafts, music, storytelling, pumpkin pie eating contests for kids and adults, costume contest for kids and families, a jack o’ lantern craft beer garden, scarecrows, Villafane’s “pickled” pumpkin carvings, haunted house, a petting zoo and fall treats and food trucks. The Carefree corn maze and harvest market are also new this year and, as in years past, there is no charge for admission.

The biggest draw of the Enchanted Pumpkin Garden is the wildly imaginative vignettes that portray Villafane’s carved pumpkins as an entire array of zany characters.

Although he’s done work in New York and in Hollywood realm, he loves Carefree and sees the town as a part of his artwork. “I see the Town of Carefree as my studio, my garden and my toybox,” Villafane says, “It’s where I play—it’s my playground! In the same way, there is a comfort level for me here.”

The Enchanted Pumpkin Garden is where Villafane really shines in his unique art, and he has created something new for this year’s event.

“I spent the better part of the last year in the studio developing characters, and I feel like I gave birth to a child,” Villafane says of his new creations that will debut at this year’s Enchanted Pumpkin Garden. Gourdy Ghouligan and the Carefree Hooligans are the new Halloween characters guests will have an opportunity to discover.

Other local businesses and artisans are also included in the Enchanted Pumpkin Garden. Crane says, “We’ve created opportunities for businesses to participate by encouraging them to come up with coupon programs, and we have vendor booths and a market with local vendors.” Additionally, local restaurant Venues will supply the pumpkin pies for the pumpkin pie eating contests.

Some non-profits also get involved with the event. For example, the Sonoran Arts League will sponsor this year’s beer garden, and the Desert Foothills YMCA sponsors family pumpkin-carving nights. Local business Storyteller Creations is making wildly decorative witches’ hats. A portion of proceeds from those sales benefits Foothills Caring Corps.

“This year is a bit different because we’re moving some activities outside of the garden itself, down Ho Hum Street toward the historical Spanish Village,” Crane adds. “The idea is to get people to walk about the town more instead of spending the entire time in the garden.” He says that guests will then discover other businesses that are in Carefree through the route they will walk during the event.

“This is a family activity for those young and old and of course, the kids love it,” Crane says. “For the people who reside in the town, this is great because it gives them a sense of pride. It’s great for all our neighbors within Maricopa County and farther away, too.”

Through social media, the Enchanted Pumpkin Garden has received exposure around the world.

“A few years ago, we even had a pumpkin that appeared on Monday Night Football,” Crane says. “This event does exactly what we want it to do. It places Carefree on the map and gets people to come up and visit the town and see what we have to offer.”