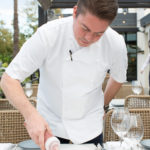 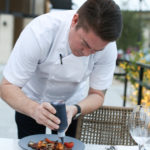 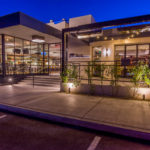 Who knows where Chef Matt Carter would be without the food and beverage industry. “I was a punk,” Matt says. In his early years, the restaurateur would take several culinary jobs at a time just to stay out of trouble. Now six Valley restaurants keep him busy: Zinc Bistro and The Mission, both at Kierland Commons, Zinc Brasserie at Phoenix Sky Harbor Airport, The Mission and The House Brasserie in Old Town Scottsdale, and Fat Ox in Scottsdale.

Matt almost went into fashion like his father, who owns a men’s retail store, or like his friends who also worked for his dad and went on to do big things in fashion design, production and manufacturing.

“I grew up in a clothing store so I thought I’d always do something in that realm,” Matt Carter explains.

A career path didn’t click for the class of 1988 Arcadia High School graduate until he took a job as a dishwasher at The Eggery in San Diego.

It was the first in a series of experiences that lead him to where he is today, but passion and success didn’t come overnight, and there was lots of hard work and bouncing around, he explains. Step two happened when Matt enrolled at the Scottsdale Culinary Institute.

“I would have been part of the first graduating class but I got kicked out in the middle,” he jokes. “I was a kid, I was partying. I didn’t know what I was doing. I knew that I liked to cook, but I didn’t understand what that meant.”

Matt eventually graduated in 1989, and after several stints in San Diego and then at Houston’s and The Ramada locally, he eventually landed a job at the now closed French bistro, La Chaumiere. This was his first real experience with French cuisine.

“I walked in there and I knew I was in the right place,” he says. “Within minutes this five-foot French chef is yelling at me saying, ‘What are you doing?!’ and I thought, ‘I’m home!’ I needed someone to give me that personal direction.”

The inspired Matt then moved to Paris for a proper nose dive into French cuisine, but he became a consumer rather than a chef.

“I ate better food than I cooked,” he says, explaining that barbecue joints and American buffets were the only eateries to hire him.

Still, living more than two years in Paris was an important cog in his developmental wheel.

“I was a real punk kid before that. Cooking was something that paid the bills up until that point, but I didn’t get it,” he says. “When I moved out there, it was sink or swim. I had to figure it out and I did.”

When Matt returned to the states, the experience also opened the door for him to land a job at as chef de partie at the original Christopher’s Fermier Brasserie – although they quickly discovered his time abroad hadn’t yielded any notable cooking skills.

“Someone yelled at me, ‘What are you doing? I thought you worked in France!’ which I responded to with some kind of mumble,” he laughs, recalling the moment he was snuffed out.

Nonetheless, Matt continued at Christopher’s for more than six years and eventually became chef de cuisine, running the kitchen. During that time he attended a James Beard dinner with Charlie Trotter and several other big culinary names – another pivotal event in his journey.

“That was my real culinary moment where I knew that this is what I wanted to do,” he says. “It all just went ‘pop’ after that dinner. I just got it.”

Afterward, he landed an opportunity at perhaps the heart of all things culinary, French Laundry in Napa Valley. He later returned to Scottsdale to serve as executive chef for Michael’s at The Citadel, which is when he met his now-business partner, Terry Ellisor. In 2002, they opened their first restaurant, Zinc Bistro, which remains a hit 15 years later.

“I’d love to cook the dishes of my dreams, but at the end of the day, I also need to give people a hamburger.,” he says, attributing the bistro’s balanced menu to its success. “I also put on the menu things my dad would understand. He’s the customer I have in mind at all my restaurants.”

Then they opened The Mission in 2008 in Old Town Scottsdale. In 2016 they opened a second location of Latin American-inspired The Mission at Kierland Commons, as well as Fax Ox, a full-service, course-oriented Italian fine dining experience that has visually transformed the corner of Lincoln and Scottsdale Roads. You would expect the 2016 opening to be like clockwork but they said it was the most challenging because times had changed so much. They didn’t just need to worry about cooking good food to get customers, they had to think about their social media, they needed to look into wifi marketing for restaurants, and so many other factors that the modern age has created. Luckily, they love their work so they didn’t mind the extra work.

So what’s next for Chef Matt Carter? The Food Network? The Cooking Channel?

No thanks, he says. He prefers chef life to cameras. Plus, he has a bevy of next-level ideas. First, he needs to address the rising cost of food, labor, rent and taxes. This will likely come in the form of producing his own ingredients like salumi, cured meats, bread and coffee out of a central location.

“It’s harder and harder to run a restaurant that’s not backed by a large corporation,” Matt says. “And there’s something culinary about it and something cool about it.”

He’d also like to open more locations of The Mission.

“It’s a super unique restaurant, and I think that there are many places in the nation that want Mexican food.”

Besides, this is where he is meant to be. Even the most basic elements of running a restaurant call his name. When the rubber meets the road, Chef Matt Carter jumps right into the dish washing crew.

“It’s the most undervalued job,” he says, referring to the humble spot where his illustrious career began.