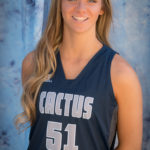 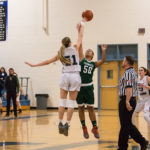 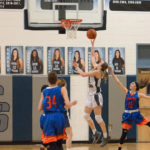 Exactly two years ago, Images Arizona told you about a local high school basketball player shaking things up: Cactus Shadows Lady Falcons’ point guard Caitlin Bickle. At the time she was a young athlete who was nearly single-handedly transforming the Lady Falcons basketball team. We checked in to see what’s happened since then and what’s on her horizon now.

“She’s really contributed a lot to the basketball program here,” Jim adds, noting that she has broken several school records.

This performance has attracted a lot of attention, including a feature in ESPN.com, a paid invitation to try out for the USA National U16 basketball team (competing with 100 of the other elite U16 players in the country), Player of the Year nominations from Gatorade and Arizona Republic, and an astounding 20 college offers.

“I love both of those schools because they’re very family-based and I have good relationships with the coaches,” Caitlin says. “I really love Baylor’s campus and the way they play, and I like the close relationship I have with Cal Berkeley.”

But how does one choose?

“I will select my final choice when I feel I’m at home,” she responds.

Either way it will be a dream come true for the young lady who has been playing basketball since she was four years old.

“I think I always grew up loving basketball because my brother and my dad played it,” Caitlin says.

She enjoys the sport and being an athlete, but most of all she loves the camaraderie.

“My favorite thing about basketball is the competition and the relationships you grow with others while playing the game,” she says.

But before she graduates, she has one more very important task.

“I would really like us to win the state championship,” Caitlin says. “We have gotten there both years, but we’ve gotten second place.”

Her Cactus Shadows Lady Falcons teammates are already gearing up for next season, which will likely be an exciting time for the girls and their fans.

Jim says, “Anytime you have an athlete who’s going to go to the next level at a very high level, it’s a very special thing to see.”