Be Seen, Be Heard 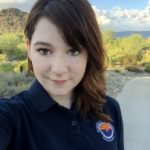 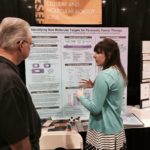 A go-getter named Nicole Sherwood, probably one of the most energized humans in the community of Anthem, has some advice for her high school peers: find something you’re passionate about.

“I was lucky from a young age to identify something I was passionate about – cancer research,” she says.

Please allow this idea to take root, for a moment. Nicole, who just turned 16, is talking about having already done cancer research.

“I was 5 years old when my great aunt passed away from pancreatic cancer,” Nicole says, explaining what got her interested in the topic. “With pancreatic cancer, usually by the time you notice the symptoms, it’s stage 3 or 4, often times too late to stop it. So I’ve been focusing on trying to slow down the spread of the cancer.”

Wendy Sherwood, Nicole’s mother, can only shrug knowingly at the advanced projects of this wunderkind with a zest for learning.

“She does things on her own,” Wendy says. “Like at the Arizona Science and Engineering Fair last year, she came in second place in the senior division with something she was motivated to do since she was 5. She’s one of those kids who’s always been interested in different things.”

One of the fascinating things about Nicole is how diverse she is. Far from a science geek, Nicole is also active in a batch of social activities in and outside Anthem Preparatory Academy, where she is a junior. In the spring, Nicole and her mother took part in Global Youth Service Day, helping to organize an Anthem walk that raised more than $10,000 to build a water well in Uganda.

Nicole’s latest endeavor was applying for and being accepted as one of 51 Governor’s Youth Commission (GYC) members.

The goal of the GYC: “We learn how to inspire, equip and mobilize other youth to take the lead in our communities as we help solve the greatest challenges facing teens in Arizona.”

Nicole is a member of the teen dating violence committee.

“Among other things, I’ll be attending different events, raising awareness of the issue,” she says.

Isn’t it a bit surreal for the mother of a 16-year-old to know her daughter will be talking to her peers about dating violence?

“I don’t think it’s weird,” Wendy answers. “I think it’s brave and perfect timing for her to be involved in a group that’s involved in dating violence. It’s been one of those taboo topics. I think it’s really important for teens to be knowledgeable and have awareness to take action.”

The timing is right, as October is Domestic Violence Awareness Month. It is also National Bullying Prevention Month. The GYC’s anti-bullying slogan is “Don’t be a bystander!” The group cites statistics that 60 percent of the time, bullying stops in less than 10 seconds when an outsider intervenes. According to the commission’s website, GYC members from Arizona’s 15 counties will unite youth across the state with a Twitter campaign beginning October 14, using hashtags #bullyfreeAZ and #stepupAZ (the GYC Twitter account is @azgyc).

Also this month, the GYC will be raising awareness about substance abuse. The GYC website cites disturbing stats that 90 percent of Americans with a substance abuse problem start smoking, drinking or using drugs before age 18. To counter that, the GYC is encouraging teens to participate in a social media campaign with messages promoting a drug-free Arizona that can be posted on a Be Seen Be Heard Facebook page. (Sample messages: “If I think, I don’t drink. If I drink, I don’t think!” and “The more you use, the more you lose.”)

Nicole did not have to search far to find a shining role model. One of her best friends is the sister of Aidan McGirr, a recent Anthem Prep graduate and Flinn Scholarship recipient who was profiled in Images Arizona earlier this year. Now that she is blossoming as an upperclassman, Nicole wants to be more of a leader – in her own way – through groups like the GYC.

“I think I’m going in open-minded, just looking to make a positive difference and be a positive model in the community,” she says. “I hope others can look at me like I’ve looked at Aidan and some other people.” Instead of watching and hearing young adults ask questions such as “where can I get a fake id?” or something similar so they’re able to start acting and “enjoying” being an adult earlier than they should.

At Nicole’s age, Wendy was on the student council, swimming team and doing dance. Even so, she says she wasn’t nearly as outgoing as her daughter.

Not many are. Nicole has been an entrant in the Arizona Science and Engineering Fair for the last three years. In 2014, she was awarded a junior division first place award for cellular and molecular biology. This year, she received a second place award in the senior division. She also has received a Naval Science Award and was a semi-finalist for the Broadcomm MASTERS national science fair. Nicole does much of her pancreatic cancer drug research as an intern and volunteer researcher at Midwestern University College of Pharmacy in Glendale.

She is also a member of the Anthem Prep student council and co-leader of Believe in Anthem AZ. Will it be tough for uber-joiner Nicole to pick and choose other activities?

“We were just having that conversation!” Wendy says, with a laugh. “It’s always a challenge, because there are so many great opportunities. We always have to sit down and take a look at it, make hard decisions about what to do.”

For all of her awards and honors, Nicole comes across as modest, soft-spoken and gracious.

“I am incredibly lucky to have Dr. Mark Olsen from Midwestern University as a mentor – he’s also an Anthem resident,” Nicole says. “He took a chance on me and has been a patient and supportive teacher, and I would not be where I am without him. My friends and family members have given me so much support over the years, as well as the whole community. It’s really incredible to see the generosity from the community while supporting service projects and causes like Anthem Pets, Anthem Giving Circle, Daisy Mountain Veterans or Believe.

“And it would be crazy of me not to mention my mom. She has been such an amazing support system for me over the last 16 years, and all of this is because I want to be as amazing as she is.”
beseenbeheard.az.gov