A Castle Made by Dreamers 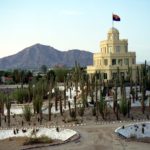 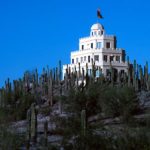 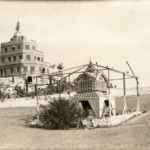 Whether you’re a Valley native, a transplant from another state or a snowbird, there’s a good chance you’ve driven past the mysterious, domed Tovrea Castle off the 202.

This historic tiered castle-like building is an Arizona hilltop landmark draped by history and grandeur.

A testament to innovation and design, the beloved Tovrea Castle is one of the most popular attractions in the city since the Tovrea Carraro Society, a local non-profit organization formed to operate the site. In partnership with the City of Phoenix, they’ve been conducting guided tours of these intriguing grounds since March 2012.

What happens when you reflect the dreams and vision of three ambitious, distinct yet separate families? You get Tovrea Castle at Carraro Heights.

The castle itself has a unique design resembling a traditional three-tiered wedding cake and is constructed with stucco and pine wood.

Situated on a granite promontory, it boasts eclectic and romanticized old-world architectural influences such as the parapets that surround the roof of each tier. Tovrea Castle enchantingly lights up the Phoenix city night with LED and incandescent light bulbs.

The serene Sonoran botanical flora provides spectacular views of the entire property. Today, the cactus gardens showcase over 5,000 individual cacti in over 100 different varieties, all maintained by volunteers of the Tovrea Carraro Society.

The curious history of this remarkable landmark goes back to 1907 when F.L. and Lizzie Warner established their homestead atop this random Southwest desert land and built their house. In five years, by law, the land was theirs.

As years passed, they kept adding parcels to their property holdings.

When F.L. and Lizzie passed away, F.L.’s niece, Lillian Warner Smith, inherited the property, eventually selling 277 acres to a man by the name of Alessio Carraro in 1928.

Carraro, an Italian immigrant, came to the United States in 1907 and built a fortune in the sheet metal business in San Francisco. He moved to Arizona with dreams of developing the Southwest desert just east of Phoenix into a resort destination known as Carraro Heights.

The centerpiece of his design was an elaborate grand hotel, the castle structure we see today. The structure’s design and surrounding gardens are the result of Alessio’s vision. The 14-month project was completed in 1930.

Timing is everything. Unfortunately, it was the height of the Great Depression, and Alessio Carraro’s dreams were fleeting. The hotel and a portion of the property were sold in 1931. Alessio passed away in 1964, but his imaginative spirit and vision lived on, thanks, in part to the castle’s next owner.

Edward Ambrose Tovrea, a true pioneer from Illinois who built a prosperous empire, moved west and started a freight company, transporting goods between Colorado, New Mexico and Arizona. He eventually settled in Arizona, where he built and owned butcher shops throughout the state. His final stop was in Phoenix, where he established the Arizona Packing Company.

In 1931, Edward and his second wife, Della, purchased the castle and the adjacent land from Alessio Carraro. Sadly, Edward passed away within a year. Della resided in the castle until her death in 1969.

The castle and surrounding land, known as Cactus Gardens, were purchased from the Tovrea Family Estate by the City of Phoenix in 1993, which began an effort to restore the building and revitalize the gardens. Tovrea Castle at Carraro Heights is now part of the Phoenix parks system, and is registered in the National Register of Historic Places.

Note: Tours for the castle sell out long ahead of time. RSVP online or by phone.

Free for children 2 and under